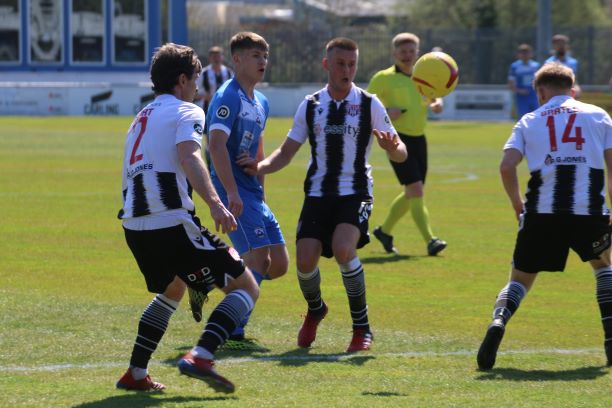 HAVERFORDWEST COUNTY and Flint Town United played out a 0-0 draw on Saturday afternoon.

The Bluebirds came into the game on the back of two heavy defeats which had seen them ship 11 goals and manager Wayne Jones was loooking for a reaction from his team.

Flint had won three of their last four games and a win would have seen them jump to third place in the play-off conference.

Flint started the game well and had an early chance from Ben Maher’s corner but Alex Jones headed wide at the back post.

The Bluebirds then began to enjoy a spell of pressure and came close to a goal when Jack Wilson’s cross evaded everybody but bounced out off the crossbar.

Minutes later, Ben Fawcett played Wilson in on the left hand side of the box but he saw his shot saved by Flint keeper Jonathan Rushton.

Midway through the half the ball was played forward for Lewis who lobbed the ball over the keeper but the ball was cleared off the line.

Both sides continued to battle and showed plenty of commitment in their challenges as the game began to heat up.

On the stroke of half time some neat play between Corey Shephard and Ricky Watts saw them set up Elliot Scotcher. His cross was flicked on by Wilson to Fawcett who turned but he shot over under pressure.

The visitors started the second half well and had a handball appeal waved away before Jordan Buckley set up Amis in the box but the striker saw his effort pushed wide by Bluebirds keeper Gajda.

The home side were left feeling aggrieved after Danny Williams was brought down on the edge of the box but no free kick was given.

Jordan Buckley then attempted an overhead kick in the box but his effort went over.

The visitors were then given a free kick on the edge of the box but Sam Hart wasted a good opportunity.

Both sides made a couple of changes as the game entered its final stages with the score still standing at 0-0.

There was a late chance for Flint as Alex Jones did well to win the ball back but he saw his shot blocked and the ball went safely to the hands of Gajda.

Flint continued to push late on but it wasn’t to be as the game finished goalless.

Lakesiders back to winning ways with comfortable victory over Flint

Wales denied at the death in heart-breaking defeat