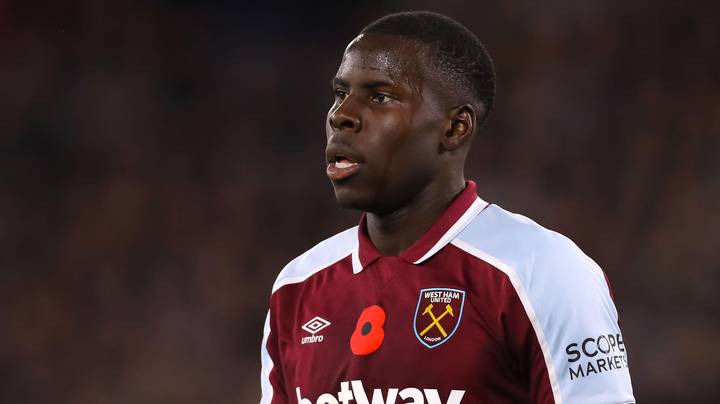 West Ham defender Kurt Zouma has been seen kicking and hitting his pet cat on camera as a video emerged online Sunday afternoon.

The video shows Zouma, 27, kicking the cat across the floor and also hitting it in the face.

The cat can be seen falling out of Zouma’s hands and being punted across the kitchen floor, before cutting to a snippet of him throwing shoes at the pet and chasing it around a room as the cat tries to escape.

Zouma is then seen punching the cat off a surface-top onto the floor, which is released from a child’s arms just before.

Below is the clip, obtained and credited to The Sun.

He has since apologised, and West Ham have claimed they will deal with the matter privately.

In a statement, Zouma said:

“I want to apologise for my actions. There are no excuses for my behaviour, which I sincerely regret.

“I also want to say how deeply sorry I am to anyone who was upset by the video. I would like to assure everyone that our two cats are perfectly fine and healthy.

West Ham signed the centre back from Chelsea last summer, and have since released a statement.

“West Ham United unreservedly condemns the actions of Kurt Zouma in the video that has circulated.

“We have spoken to Kurt and will be dealing with the matter internally, but we would like to make it clear that we in no way condone cruelty towards animals.”

The Frenchman’s brother Yoan Zouma is believed to have filmed the video, and can be heard laughing in the background.

“I deeply regret my involvement in the video that has been widely circulated and unreservedly apologise, not only for my actions, but for the upset and distress this will have caused to so many people.

“I am now taking time to reflect on what I have done but wish to assure everyone that this was an isolated incident and not something that I am proud of.”

A spokesperson said: “This is a very upsetting video. It’s never acceptable to kick, hit or slap an animal, for punishment or otherwise

“We are so grateful to people who report suspected animal suffering to us and we would like to reassure people we will always look into and, if necessary, investigate any complaints made to us about animal welfare.”

The Metropolitan Police have stated they will not investigate the incident.

Pontarddulais up to fourth after beating Milford