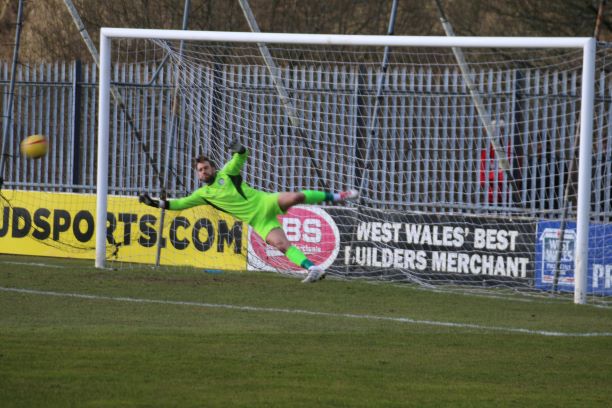 HAVERFORDWEST COUNTY withstood heavy second half pressure from Cardiff Met as they held on for a 1-0 win on their return to action.

Danny Williams’ first half penalty proved to be the difference between the sides but the Met were left to rue a number of missed chances.

Both sides were playing their first games since December after a rise in coronavirus cases forced the league to be suspended.

Both sides took the knee before the game as they reinforced the message that there is no room for racism in football.

Cardiff Met had the first opportunity three minutes in as a cross from the right fell to Tom Price but he saw his shot blocked wide for a corner.

Moments later another cross from a similar position caused more panic in the box but Lewis Rees shot into the side netting from a tight angle.

The Bluebirds had a couple of crosses but Cardiff were able to deal with them,

There was an early yellow card for Emlyn Lewis as he put an arm out to stop Ben Fawcett’s break. From the resulting free kick the ball fell to Alaric Jones but his shot was tipped wide for a corner.

Scott Tancock then came close from the corner but his header went straight into the arms of the Cardiff keeper.

Midway through the first half, Danny Williams intercepted the ball for the Bluebirds in the middle of the field and he passed to Ben Fawcett who saw his shot pushed wide.

Three minutes before half time Danny Williams was brought down in the box and the referee pointed to the spot.

Williams picked himself up and fired the ball high into the net to give the home side the lead.

The Bluebirds led at the break but it was Cardiff, having made two changes, who started the second half the better of the two sides.

Lewis Rees was put in but his shot was easily saved by the Haverfordwest keeper.

The visitors had much of the posession in the second half but they were unable to find an equaliser.

The Met won a succession of corners and from one of them, Emlyn Lewis headed over the bar.

Matthew Chubb tried his luck from long range but the County keeper made a good save to keep the home side ahead.

With five minutes to go, Lewis Rees crossed into the box but sub Ollie Hulbert was inches away from making a connection.

The Bluebirds hung to seal an important win.

Carmarthenshire youngsters overjoyed to get back to the classroom