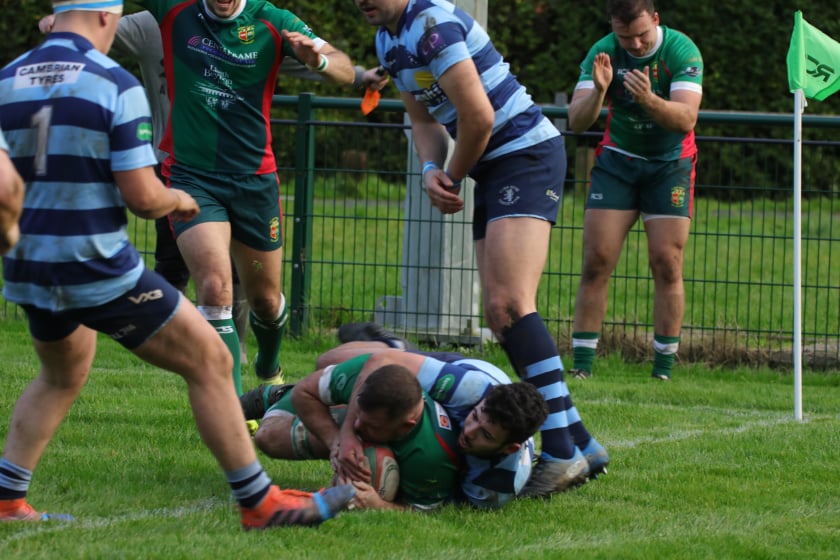 HENDY held off a late charge from Aberystwyth as they got their League 1 West season off to an excellent start on Saturday (Nov 13).

Conditions were perfect for fast open rugby with no wind or rain to get in the way of good handling of a dry ball.

Aber started strongly after kicking off as they forced their opponents back close to their try line.

Then, for nearly fifteen minutes, they had drive after drive stopped in their tracks by the determined tackling of the home side’s powerful defence. Hendy turned over Aber possession in the loose two or three times and eventually drove them back.

From the early scrums and lineouts it became clear that domination up front in the set pieces and in the loose would be difficult for the visitors. Whereas Aber had been forced into making a few changes in their pack, the hosts’ well-drilled forwards had more experience of playing together.

After the frustration of failing to score early despite huge territorial advantage, Aber lost ground as Hendy’s forwards made progress upfield and opened the scoring with a penalty from 40 metres out, scored by Rhydian Morris.

Aber then lost back-row forward Lee Truck with a back injury to be replaced by Steffan Rattray.

Morris added another penalty for the home side and shortly after they scored their first try when they broke up Aber’s scrum five yards from their try line and Dean Courtney grounded the ball. The conversion failed but at 11-0 the hosts looked comfortable.

The visitors’ first try came from a long clearance kick by Hendy’s full back which was fielded by full-back Matthew Hughes well within his own 22 metre area.

He set off on an amazing, jinking run which left the opponents snatching at his shadow as he broke to within five metres of the Hendy try-line before feeding Arwel Lloyd, well up in support, to score. Hughes converted the try he had so brilliantly created and Aber were back in the game at 11-7 at half-time.

The second half started badly for the visitors as prop Oisin Canney was yellow carded for blocking.

Aber then won a scrum deep in their own half and before scrum half Benjamin could pick up the ball he was tackled by his opposite number who gathered the ball and raced over for a try. This was converted by Morris and the score moved on to 18-7.

Aber quickly recovered and from broken play, scrum half Dylan Benjamin scooped up the ball and made a break for the line. When he was stopped he found centre Dylan Evans on hand for the try scoring pass. Crucially, the conversion was missed but Aber had closed the gap to 18-12.

More and more handling errors crept into Aber’s game after this as they tried too hard to get on top. It was from such an error that Hendy increased their lead with another converted try to move to 25-12.

Hendy’s try scorers in the second half were scored by Ieuan Badham and Courtney.

The visitors were soon to close the gap though. One of the many features of the senior squad’s game that Aber’s coaches, Iestyn and Ifan Thomas have made cast iron, it is the attitude never to give up.

A break upfield by Dylan Evans took him to within ten metres of the Hendy line before he fed the supporting Ben Jones who found Sam Hesden storming up on his left to score Aber’s third try.

Hughes converted and at 25-19 they had everything to play for. However, the home soon extended their lead to 28-19 with a penalty from Morris.

Aber had the final say as winger Ben Jones showed what he could have done had he seen more ball more quickly during the game. After a powerful break he fed Matthew Hughes who provided the scoring pass for Dylan Evans’ second try of the match. Hughes converted almost on the stroke of full time to close the scoring at 28-26.