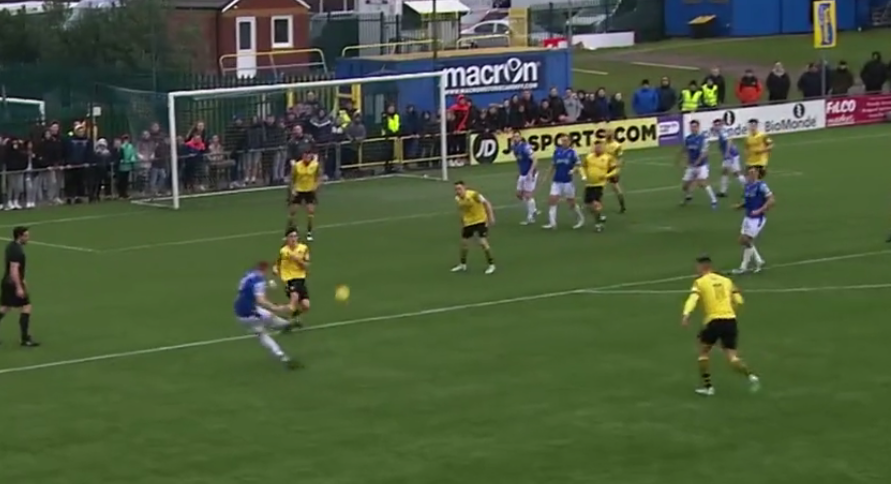 PENYBONT reached the semi-finals of the Welsh Cup for the first time on Saturday (Feb 19) as they beat Taffs Well 3-2 at the SDM Glass Stadium.

Taffs Well started brightly but with only two minutes gone, Keane Watts led a break for the Bont and he found Lewis Clutton who slid the ball into the bottom left corner of the net.

Watts then came close with an acrobatic effort but the ball went wide of the target.

The Wellmen had a good chance to equalise on 21 minutes as a mix-up in the Bont defence allowed Lyon in but his shot was saved by Ashley Morris.

Neither side was able to have an extended period of pressure because of the strong winds but the chances still came.

A good cross from Nathan Wood received no takers before Clutton came close to scoring his second of the game when his shot was blocked.

With two minutes to go until the break Sam Snaith played Nathan Wood through on goal. He took it around the keeper but the Taffs Well defender got back in time to close the angle and force Wood to shoot wide.

They were made to rue their missed chances on the stroke of half time though as the Wellmen equalised.

The Bont were unable to clear their lines and that allowed Lyon to score at the back post.

The home side made two changes at the break but it was Taffs Well who scored seven minutes in.

The Wellmen won the ball back before sending it into the box for Jan Maertins whose first touch outsmarted the keeper but he then had to regain control of the ball before firing through three Bont defenders to score.

There was almost a third for the Wellmen but Ashley Morris did well to stop a lobbed effort.

With just over an hour gone a corner from the Bont swung in dangerously and the Well keeper had to be alert to push the ball over.

Kane Owen then forced a save out of the keeper and Snaith was unable to score on the rebound.

The Bont continued to pile on the pressure and with nine minutes to go the Wellmen were down to ten men.

Marcus Jones was a shown a second yellow card for a foul on Clutton and it meant the Wellmen faced an uphill task if they were to see the game out.

However, the game changed on the 87th minute as Kosta Georgievsky headed the ball back across goal for Snaith who headed in to level the game.

And just a minute later the home side were ahead as Mael Davies shot from outside the box but the ball was turned in by Dan Jefferies.

There was a late chance for the Wellmen but Scott Hillman’s effort went over and the referee blew for full time.