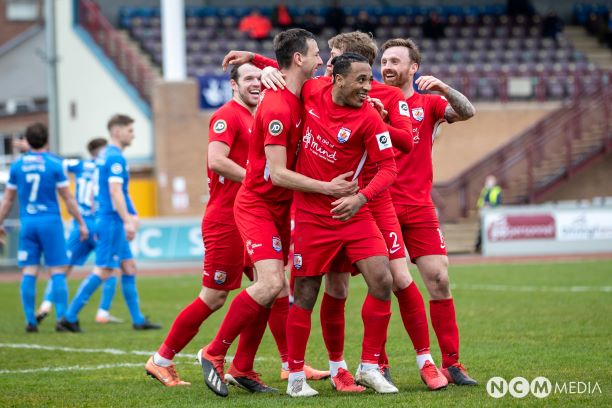 Photo by Nik Mesney/NCM Media; Report by Will Catterall

CONNAH’S QUAY NOMADS extended their lead at the top of the table as they beat Haverfordwest Conty 2-0 on Saturday (March 20).

A George Horan strike at the end of the first half, followed by Michael Wilde securing his 200th goal in the Welsh top-flight, saw Nomads extend their lead at the top of the table.

The game saw two of the JD Cymru Premier’s in-form sides go head to head, with league leaders Connah’s Quay Nomads on a 12-game unbeaten run, whilst Haverfordwest came into the fixture full of confidence after a 2-1 victory over TNS in the previous week.

Following a 3-1 win over Bala Town in the midweek, Andy Morrison made only one change to his side, replacing Declan Poole with Craig Curran who scored in that game.

On the bench was Jamie Insall who returned from suspension, along with Rio Glean who was included in the squad for the first time since his signing in February.

Haverfordwest meanwhile started recent signing and Euro 2016 Wales international Jazz Richards, and made only one change which saw captain Sean Pemberton return to the side.

Nomads quickly took control of possession upon kick off, which led to them targeting the Haverfordwest area with a combination of set pieces and attacking runs down the wing throughout.

Aron Williams was putting pressure on the visitors with his long throw-ins, which led to a George Horan header in the 4th minute going just wide of the top right corner.

In the 7th, Neil Danns received a Williams cross and headed wide as Nomads searched for an early opener against the Bluebirds.

John Disney was proving solid at the back for Connah’s Quay, while also stepping up to deliver set pieces for his side. In the 13th, he sent a free kick up to Wilde, whose effort ricocheted around the box before being cleared.

Despite dominating so far in the game, the Nomads were still looking to break the deadlock, winning corners in the 17th and 18th minutes which were cleared away before they could test keeper Matthew Turner.

As the half went on Nomads’ pressure only increased, with Wilde having a chance to shoot from six yards in the 25th, but he couldn’t get under the ball before it was swept away.

On 28 minutes, Nomads had one of their best chances so far when Danny Davies fired a shot from around 18 yards towards goal only to be denied by a great save from Turner.

After the half hour mark, Connah’s Quay were constantly getting at the Haverfordwest end with multiple runs from the likes of Williams and Davies helping Michael Wilde threaten upfront.

But just as it looked like the half would end goalless, Nomads won a 45th minute corner which was taken by Aron Williams and slotted home from just four yards by captain Horan.

As Nomads turned to celebrate, there were protests from the visitors to disallow the goal for an infringement, but after a discussion with his assistant, referee Rob Jenkins ruled that it stood, giving Nomads the lead at half time.

During the interval Haverfordwest’s Turner was forced off with injury, meaning substitute keeper Wojciech Gajda came on to replace him at the start of the second half.

As the half went underway, Nomads were soon back in the Haverfordwest final third, going close on 51 minutes after Davies crossed to Horan who headed just over.

Two minutes later, Haverfordwest threatened to equalise in spectacular fashion when a Corey Shephard bicycle kick went close to Ollie Byrne’s goal, but over the crossbar.

However, the Bluebirds’ chances were few and far between thanks to Nomads’ disciplined defensive shape including the likes of Danny Holmes and John Disney who consistently intercepted their attacking play.

As the hour mark approached, Nomads were putting sustained pressure on the Haverfordwest end, and this paid off in the 59th to see Michael Wilde clinch his 200th goal in the JD Cymru Premier.

Craig Curran beat his man to get on the end of a high ball from Danny Holmes, and coolly squared the ball to Wilde allowing him to simply slot in at close range to pass another milestone in his star-studded Welsh football career.

Having extended their lead, Nomads continued to dominate play as they looked for a third, going close in the 65th when Horan sent a bullet header wide.

Andy Morrison then made his first change, replacing Craig Curran with Jamie Insall who set to work on getting on the scoresheet.

And the Nomads’ number ten caused problems for Haverfordwest, intercepting them in the midfield to surge through in the 77th and set up Danny Davies, whose shot was collected by the keeper.

In the 82nd, Callum Morris went close when he made a blistering run and beat his man to go one on one with Gajda, who made a sweeping save to stop his shot from eight yards.

As the final stages neared Nomads made a second and final substitution, seeing Johnny Hunt come on to replace Danny Davies.

And Hunt’s job was a simple one, with Nomads controlling all aspects of play as they took their thoroughly professional performance through injury time and to the final whistle at Deeside.

The win sees Nomads extend their lead at the top to six points, with 2nd placed TNS still to play a game in hand next week.

Connah’s Quay meanwhile will prepare for their final game of phase one in the JD Cymru Premier, facing Newtown AFC at Latham Park for a 5:00pm kick off on Good Friday, April 2.

Haverfordwest are next in action on Saturday, March 27, as they visit Newtown.