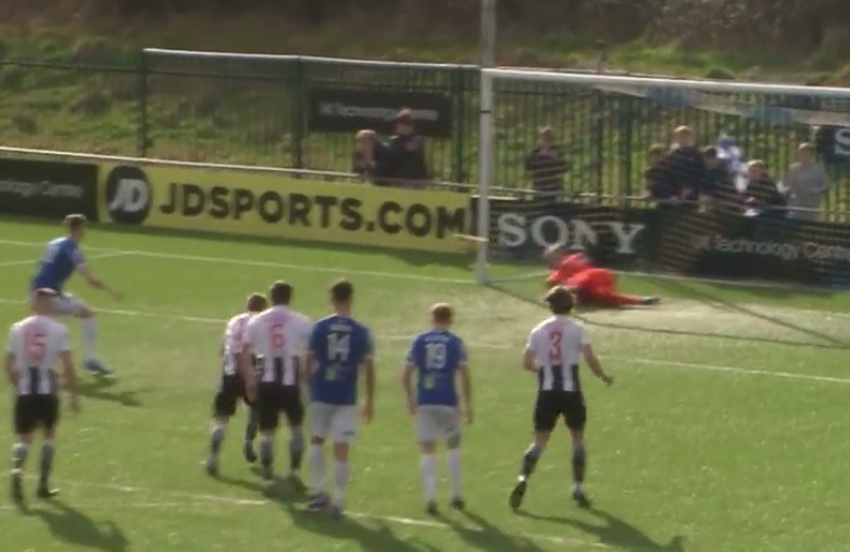 PENYBONT and Flint Town United were forced to settle for a share of the points on Saturday (Feb 26) as their game ended 1-1.

On his return to the starting line up, Flint’s Jon Rushton more than justified his selection with a string of excellent saves, including stopping a penalty, to help his side earn a point.

The hosts raced into an early lead with barely a minute on the clock. Mael Davis was allowed to make inroads down the right flank, before firing a ball into a crowded Flint box.

The ball looked to take a glancing touch off Nathan Wood, before finishing in the back of the Flint net, with Rushton, for just about the only time in the afternoon, unable to do anything about it.

The early lead gave Penybont some wind in their sails, and they set about Flint with gusto for the next 25 minutes or so, forcing a series of corners and free kicks from just outside the box.

Fortunately, for the Silkmen, Rushton’s positioning and handling was impeccable, and he refused to allow his goal to be breached for a second time. He brilliantly tipped over a Kane Owen free kick, and then was on hand to react quickly to save from Lewis Clutton who had been played in with a ball over the top.

The Bont players were forcing their high press onto Flint, and the Silkmen’s defence were finding it difficult to play the ball out of defence and create any constructive forward play.

It was going to need something special to turn the tide, and on 36 minutes, Ben Maher duly produced.

He picked up the ball about 20 yards from his own goal, and then surged upfield before slipping in Callum Bratley, who took the ball in his stride inside the box.

As he looked to take it round Billy Borge who had come across to try and close him down, an outstretched foot from the defender clipped him and he tumbled to the ground, gaining a penalty for his side.

Up stepped Michael Wilde to confidently blast the ball past Ashley Morris and level the scores.

Rushton was then called into action once more two minutes before the break to brilliantly tip over a Wood half volley.

The second half was a much more even affair, as Flint enjoyed more possession and were more potent as an attacking force. Indeed, Ross Weaver had a couple of half decent chances within a couple of minutes of the restart to put his side into the lead.

The first effort was blasted into the side netting whilst the second forced Morris into a good stop, after the Flint midfielder had brought down a Sam Hart delivery with his chest before blasting his shot goalwards.

Rushton then pulled off another great stop to deny Owen’s long range effort, but Flint were unable to clear the ball from the danger area, and a rash grab by Weaver on Kai Whitmore, as they tussled for possession just inside the box, resulted in another penalty award, this time for the home team. But Rushton distinguished himself once more, and sprang to his right to keep out Wood’s effort from the spot.

From a Penybont corner on 63 minutes, ex-Welsh international Shaun MacDonald hit a stinging volley from 10 yards, but Rushton produced another top drawer save to deny him.

Then a good move by Flint resulted in Wilde playing in Alex Jones with a nice flick. Jones picked the ball up just outside the area, ran through to the angle of the 6 yard box, but pulled his shot across the face of the goal, to his immense frustration.

On 70 minutes, Clutton made a good run from the left hand side for Bont, penetrating the danger area, before firing off a shot that Rushton blocked with his feet.

As the game entered stoppage time Flint had chance to nick the win following a Jake Phillips throw in.

Wilde flicked the ball on, and in the melee that followed, Jones tried to head the ball goalwards, but it was hooked clear off the line to deny the Silkmen the chance to overtake their opponents in the table, and the points were shared.