Penybont move up to fourth 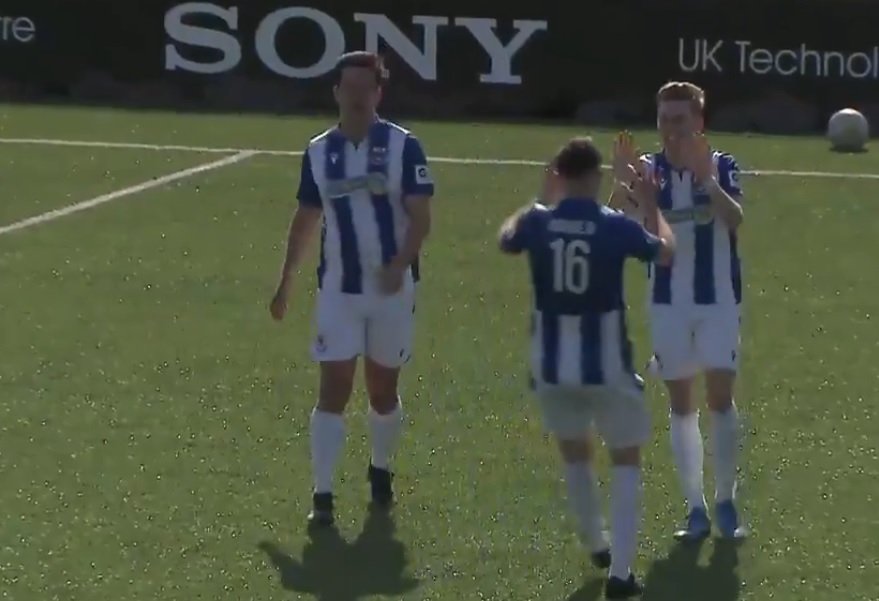 PENYBONT jumped up to fourth place in the JD Cymru Premier on Saturday afternoon (Apr 24) as they beat Caernarfon Town 2-0 at a sunny SDM Glass Stadium.

It took the hosts no more than 45 seconds to register their first chance as Ben Ahmun connected with a low cross from the skipper Kane Owen, with the subsequent effort being deflected behind for a corner.

Bont then began to dominate proceedings as they won their individual battles and strung passes together with composure in the middle of the park. Plenty of questions were asked of Caernarfon defensively but Bont were unable to thread the killer ball in the final third.

After the 15-minute mark had passed it looked as if the away side were growing into their own as they began to assert themselves physically, but despite the huffing and puffing neither side were able to break through.

The Penybont skipper continued to threaten with his deliveries into the box as he helped create the first clear cut chance of the tie. His first time cross was met by Kostya Gorgievsky who directed it into the path of Ahmun.

The striker struggled to generate enough power behind his volley to threaten Canaries keeper, Lewis Brass.

After a long spell of huffing and puffing, Bont finally take the lead at the half-hour mark. Nathan Wood showcased his technical ability as he beat his man to find Georgievsky at the back post who was able to poke in a header. A deserved reward for Kostya who makes it three goals in his last five appearances.

Not long after having a penalty shout turned away by referee Bryn Markham-Jones, Caernarfon mustered up a half chance at the edge of the area in the 41st minute. The ball broke free for striker Michael Hayes who snatched at the ball to send it whistling over the bar.

The away side almost flew out of the gates to start the second half as Hayes raced away from the Bont back line. His touch proved to be far too heavy though, allowing Ashley Morris to gather the ball.

Georgievsky almost made it a brace of headed goals just minutes later, yet again from a Kane Owen set piece. He rises the highest out of those in the box and connects well but struggles to steer the ball far enough away from Brass who does well to react.

Billy Borge also came close, as his lunging effort caught the keeper off guard as the ball curled onto the post.

Kane Owen nearly added his name to the score sheet on the hour mark as he struck a beautiful free kick that looked destined for the top corner. However, Lewis Brass was equal to it again, as he proved himself to be Caernarfon’s best performer of the afternoon by rescuing his side from being left in the dust by the hosts.

Substitute Jake Bickerstaff had a half chance to bring the two teams level in the 71st minute, as he found himself in space at an angle within the penalty area. His powerful drilled effort bristled the side netting but didn’t appear to worry Morris.

The Bont backline were caught out after Morris meant sliced his clearance. The visitors did well to gather the ball and work their way into the box, with Sion Bradley finding himself in on goal. Morris more than made up for his previous error as he kept out a decent strike from Bradley, allowing for Owen to clear the danger.

It appeared as if Caernarfon waited until the dying embers of the match to play their best football, as they began to break down the hosts who had been resilient up until then.

Nathan Wood finally put Rhys Griffiths at ease by firing the hosts into a two-goal lead deep into injury time. Georgievsky returning the favour by being the playmaker this time, cutting the ball in from the right-hand side for Wood to arrow the ball into the bottom corner.

A welcome relief for the home side who, for a short period of time, were hanging on to their one goal advantage.

Dragons come from behind to see off Warriors

Giggs, Rush, Bale and Hughes: The best welsh footballers ever?