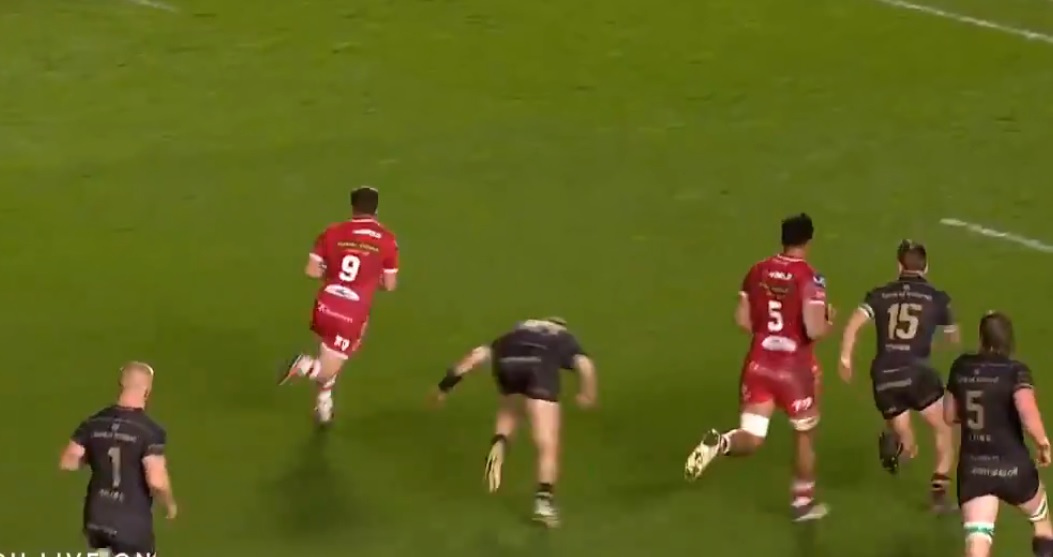 SCARLETS produced a stunning second half display as they scored 29 unanswered points to seal a 41-36 victory against Connacht on Monday night (March 22).

The home side knew they needed to win if they were to finish in third place in Conference B and secure Champions Cup Rugby for next season.

They did make a bright start with an early try but Connacht, who had already secured second place in the conference, ran in five tries to lead 33-12 at the break.

The Scarlets, however, did not give up and their storming second half display saw them run in a further four tries to seal a remarkable win.

Just two minutes were on the clock when Sheffield Hughes sent a long pass out to the left for Aaron Shingler who had acres of space and an easy run to the try line. Dan Jones sent the conversion attempt just wide.

It was a good start for the home side but on 10 minutes Marc Jones was shown a yellow card for being offside.

From the resulting scrums, the ball was played out left on the second occasion to John Porch who went over with ease. Conor Fitzgerald added the extras and all Scarlets’ early work had come undone.

With eighteen minutes on the clock, Connacht pushed forward again and the ball came to Papali’I who forced his way over for the try but Fitzgerald sent his conversion wide.

On 25 minutes it was Scarlets’ turn to attack and they thought they had scored when Tom Rogers touched the ball down but after being checked by the TMO, the try was ruled out after Pieter Scholtz had put his elbow up to fend off a tackle.

Scholtz was yellow carded as a result and within minutes, Connacht had marched up the other end of the field and Porch found O’Brien who made his way over for his side’s third try. Fitzgerald added the extras to give the visitors a 19-5 lead.

The home side were not out of the game though and moments later Steff Evans found captain Steff Hughes who dived over for the Scarlets’ second try. Dan Jones added the extras to put his side within seven points.

They would have been happy to go in at the break with the score as it was but the visitors had other ideas. With just over five minutes to go, the home side were penalised for a knock on and the resulting play saw Dominic Robertson McCoy force his way over from close range. Fitzgerald added the extras.

That gave them a bonus point and they soon had their fifth try of the half. Niall Murray made an excellent break up feld and Tom Daly’s offload fell to Kieran Marmion who dived over to score.

Fitzgerald added the extras again and Connacht held a 33-12 lead at the break.

The Scarlets had been outplayed by five tries to two and they knew they would need something special in the second half if they were to turn the game around.

They made a good start to the second half as a good break from Johnny Williams found Hughes who dived over for his second try of the game. Jones added the extras from in front of the posts.

They weren’t done there and with ten minutes of the half gone they broke again with Sam Lousi finding Dane Blacker who dived over to give his side their bonus point try. Dan Jones added the extras and the score stood a 26-33.

Five minutes later the Scarlets scored their fifth try of the game as Tom Rogers skipped past the Connacht player on the wing and ran down the line to touch the ball down. Jones missed the conversion but the home side were back to within two points.

With 63 minutes on the clock Connacht had a line out five metres out but it went long and Scarlets were able to gather the ball.

The Scarlets regained the lead six minutes later as Dan Jones landed a penalty to make it 34-33 to the home side.

On 73 minutes Javan Sebastian forced his way through to touch the ball down on the line and Jones added the extras again.

With just over a minute to go, Connacht finally grabbed their first points of the second half as Jack Carty slotted a penalty through the posts to bring them back within one score at 41-36.

There was little time left though and with time ticking over 80 minutes, Connacht had the ball in their own 22 but a knock on gave the Scarlets a remarkable win.

Bristol 'Kill the Bill' protest: The demo that turned ugly