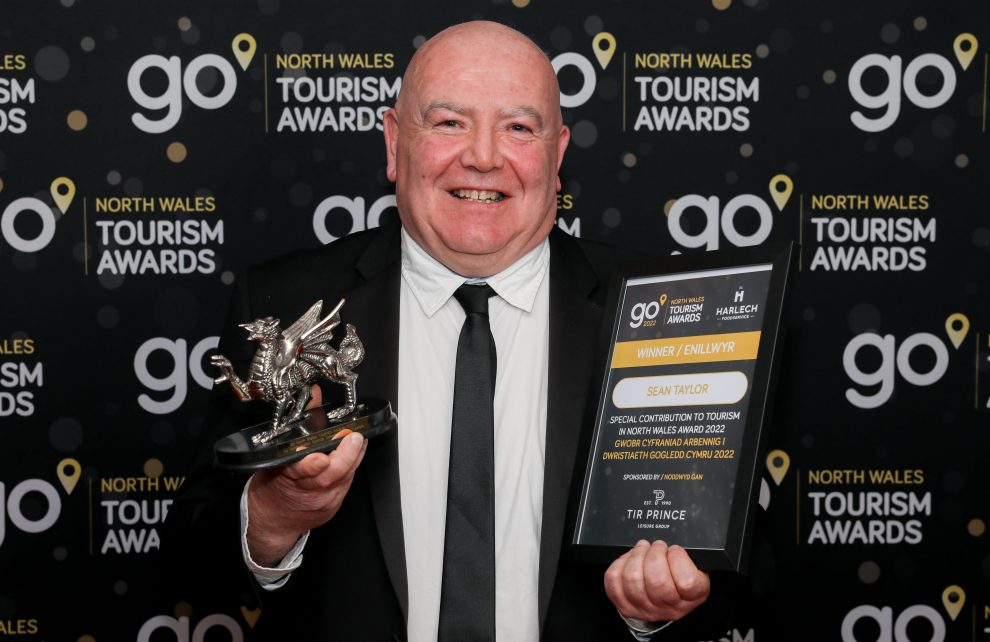 A FORMER Royal Marine Commando who has revolutionised tourism in North Wales has been honoured for his “immense contribution” to the industry.

Sean Taylor, founder of the fast-growing, adrenaline-fuelled Zip World empire, was given the special contribution to tourism award at the prestigious Go North Wales Tourism Awards.

The headline sponsor for the glittering event at Venue Cymru in Llandudno was the leading food distribution company Harlech Foodservice, that’s celebrating its 50th anniversary this year, and it was hosted by acclaimed journalist Sian Lloyd who hails from Wrexham.

After two decades as a hard-bitten commando and a period working in private security, Sean returned to his native North Wales in 2007 for his first foray into tourism with the high-wire Tree Tops Adventure attraction in a forest near Betws y Coed.

Six years later he launched the fastest zip wire in the world with customers soaring high above the Penrhyn Quarry in Bethesda.

Not content to rest on his laurels, in 2014 Sean unveiled underground trampolining at Bounce Below in the Llechwedd Slate Caverns of Blaenau Ffestiniog.

The latest ventures include Underground Golf at Llechwedd and the SkyFlyer airship in Rhyl that will carry thrill seekers 400ft in the air when it takes off next year.

With Sean at the helm as president, the company is now spread over seven sites across Wales and the north of England, having recently branched out into the Lake District and Manchester.

And there’s a chance that Zip World, now valued at £100 million and Sean has plans to expand even further, with expressions of interest regularly coming from Europe, the Far East and America.

“This is a great area to operate in and I’m privileged to work with some wonderful people.

“We’re proud to be a North Wales company and very close to our roots, very much embedded in our community.

“North Wales is such a compact area, it’s varied, accessible and exciting and last but not least it’s amazingly friendly.

“When you’ve got all this right it’s a great place to visit.”

Closer to home, the company has bought hotel in Capel Curig as it looks to expand into the short breaks market.

Sean says the company, with its headquarters in Llanrwst, will always be a Welsh company at heart.

Jim Jones, the chief executive of North Wales Tourism who headed the judging panel, said: “It is hard to overstate the immense contribution Sean has made to the tourism and hospitality industry in North Wales.

“We had a vision of transforming the region into the adventure capital of Europe and he has played a huge role in making that dream become a reality.

“Sean has a huge drive and ambition, coupled with the imagination to create innovative and exciting high octane attractions that have made the world sit up and take notice, putting Wales firmly on the tourism map.

“As a result, ZipWorld has created hundreds of jobs and pumps hundreds of millions of pounds into the economy of North Wales.

Another big winner on the night was the Plas Dinas Country House Hotel in Bontnewydd, near Caernarfon, which is making the most of its royal connections.

It was crowned Hotel of the Year for the second year running while its acclaimed Gunroom Restaurant won the coveted food and drink award.

The leasehold for Plas Dinas Country House was bought by Daniel and Annie Perks in 2019 after they fell in love with the former royal retreat.

Back in the 1960s, it provided a bolthole for Lord Snowdon, formerly Anthony Armstrong-Jones, and Princess Margaret, hidden away from the glare of London life.

It was also where Lord Snowdon used as a base to mastermind Prince Charles’s investiture at Caernarfon Castle in 1969.

A delighted Daniel Perks said: “It’s an amazing double, a dream come true, and it’s down to a lot of hard work and a great team.

“Annie and I dreamed of having our own hotel and restaurant and we started from the bottom and worked our way up, putting as much in as we could and putting together an amazing team.

“Plas Dinas is really a place where our dreams have come true.”

It was a case of double joy for Frankie, who earlier in the week won the Entrepreneur for Good category, at the Great Britain Entrepreneur Awards.

She said: “I’m not concerned about profits as much as long-term sustainability – I’m investing in that and it’s paying off.

“Fifteen years ago the business environment was very different and these days people like to feel that they’re visiting a sustainable operation.

“It’s always lovely to win something but every little thing we do to make the business more sustainable is very important because everyone can do something and we’re trying to encourage and inspire people to do that.”

Across North Wales, Commonwood Leisure, in Wrexham, won the Go Holiday Park of the Year Award while Rivercatcher Luxury Holiday Cottages, in Llandrillo, near Corwen, was honoured in the self-catering category.

David Cattrall, the managing director of Harlech Foodservice, said: “We were only too pleased to have the opportunity to once again be the headline backer of the awards because the tourism and hospitality industry is the lifeblood of the North Wales economy and also represents much of our core customer base.

“The past few years have been incredibly difficult for everybody and tourism and hospitality is one of the sectors that has suffered the most in terms of economic impact.

“But as the awards have shown tonight we are a resilient lot thanks to an army of heroes who work on the front line in this important sector.

“It is important that we continue to celebrate our many achievements and there are reasons to be optimistic about the future.

“The scale of the investment going into North Wales to improve our tourism and hospitality infrastructure is a vote of confidence in the region.

“The things that have made North Wales a world class, must visit destination are still there.

“Not so long ago the sector was contributing £3.6 billion a year to the regional economy so I am sure that we can play a big role in leading North Wales to economic recovery, creating a brighter and more prosperous future.”

Go Self Catering of the Year sponsored by Pario Leisure Group –
Rivercatcher, Corwen.