Home » From Wales: A Ukrainian perspective on Putin’s War 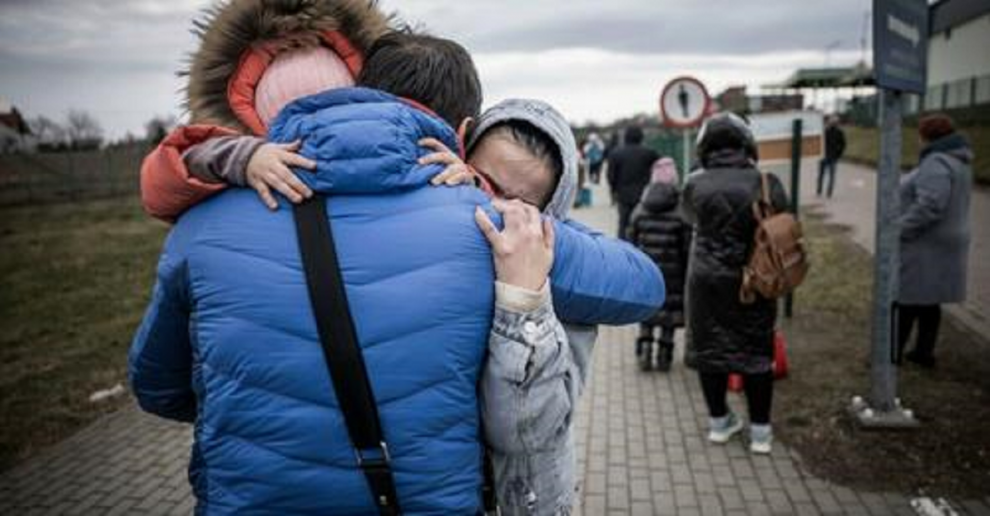 UKRAINE has deep links with Wales.

In the nineteenth century, Welsh miners travelled to the east of the country to help establish their mining industry in the Donbas region.

To get a personal perspective on the Russian War against Ukraine, we spoke to a member of that community.

A former Ukrainian volleyball international, Tanya Hayes lives in Cardiff with her family. She comes from Odessa, in Ukraine’s south. In the Soviet era, Odessa was the key port for Russian international trade and now fulfils the same function for Ukraine.

Her husband, Richard, is a lawyer with a multi-national consultancy. They met when Richard worked in Leicester for East Midlands Police, and Tanya visited relatives.

They’ve been together for fifteen years.

In Ukraine, Tanya was the finance manager for a large company. Her accountancy qualifications aren’t recognised in the UK. She works part-time as a dental assistant and raises her and Richard’s children.

Before we talk to Tanya, however, some context.

Ukraine enthusiastically embraced independence when the Soviet Union collapsed. After a series of Moscow-friendly administrations, it threw off its yoke and began to consider taking its place in Europe, looking west rather than east.

The journey has been difficult, not helped by the interference of its massive eastern neighbour in its internal politics and Russian aggression – including the illegal annexation of the Crimea in 2014 and the arming of rebels in Ukraine’s mineral-rich easter provinces.

Ukraine’s soil is remarkably fertile. The black earth means it is one of the world’s major grain producers. The Ukrainian people still remember how Stalin forced the country into famine at a time of surplus food production, creating a humanitarian disaster that killed millions of its citizens in the name of communism and ideologically driven agriculture.

However, there is a significant Russian-speaking minority in the country, a minority of which prefers to look to Russia than to Europe.

The mix makes for a complex political picture in a country that houses many other minority groups, including a very large Greek diaspora and those whose heritage includes Hungarians, Polish, and Romanians. Their presence reflects Ukraine’s importance as a bridge between the Black Sea and the Sea of Azov and the rest of continental Europe.

Tanya told us: “Putin hoped that Ukrainian people would not defend themselves but surrender without fighting. The opposite happened.

“The Ukrainian people got together like never before. They help each other out, people join the army, civilians help the army and each other. They’ve become heroes alongside their hero President Vladimir Zelensky.”

Tanya continued: “I watch Ukrainian news and programs about the situation, and I speak to my friends there.

She outlined the Russian strategy.

Since 2014, Putin’s idea has been to take over part of the east.

“His ultimatum is to give him these lands, to accept Crimea is his, and to take Ukrainian troops from Donetsk and Luhansk.

“Putin and his KGB cronies brainwash the Russian people. Everything he claims is absolute lies.

“The Russian government orchestrates everything and pretend that they are innocent.

“According to captured Russian soldiers, they were told they were being deployed to the Ukrainian borders for training. Most of them are 18–21-year-old boys. They are used as a cannon fodder.”

Tanya discussed the War’s progress: “First, the Russian tactics was to scare. They bombed a bit, but it didn’t work.

“Next, they started to attack villages and little towns.

“When that didn’t work either, they’ve moved to bomb bigger cities. They’ve tried to occupy places, but people don’t surrender.

“They say: ‘Russia: f*ck you’. There’s even post mark being made with this iconic slogan.”

Tanya continued: “The Ukrainian people got together like never before. They help each other out, people join the army, civilians help the army and each other.”

A CRIME AGAINST HUMANITY

We asked Tanya what was happening on the frontline in Ukraine.

“The Russian army behaves like criminals. They are bombing civilians, bombing schools, nurseries, hospitals, museums (THE museum of one of the famous Ukrainian artist Maria Primachenko was ruined.”When they bomb people’s homes, they aim at basements, so people won’t be able to get out if they shelter in them. It is a humanitarian crime!

“However, despite that, the Ukrainian people are staying strong and stay being human beings.

“When they capture Russian soldiers, they treat them well, do operations if needed, feed them and do not physically harm them.

“It is in the Ukrainian character – they are human, kind, and humanitarian.

“Also, Ukrainians have great sense of humour. Being in such a horrific situation the Ukrainian people are still making jokes and laugh in the face of violence.”
Tanya told us about the reaction in Russia.

“Russian people starting to come out in streets (although they are badly treated by their police) and many Russian scientists wrote a letter to Kremlin with a demand to stop the war.”
On the international front, Tanya was grateful for the aid given to her country.

“There’s lots of help from outside of the world.

“But the places in Ukraine which most needed help – medical, water, food – can’t get it because Russian army is constantly shooting and bombing those places without allowing a green corridor for humanitarian help.
“This is a crime. This is disgusting crime from humanity! Lots of people are left without water and food for days and we can’t help them!”

Tanya told us: “I have no parents or siblings living in Ukraine. When it comes to what the UK is doing to help refugees, cousins and uncles aren’t close enough to qualify. Many are staying put, waiting out the storm around them and hoping for the best.

“Hundreds of thousands are fleeing to nearby countries, like Poland and Hungary. They support the people as they try to escape from the Russians and their evil War.

“I love my people and my country. I hope they will be okay.”