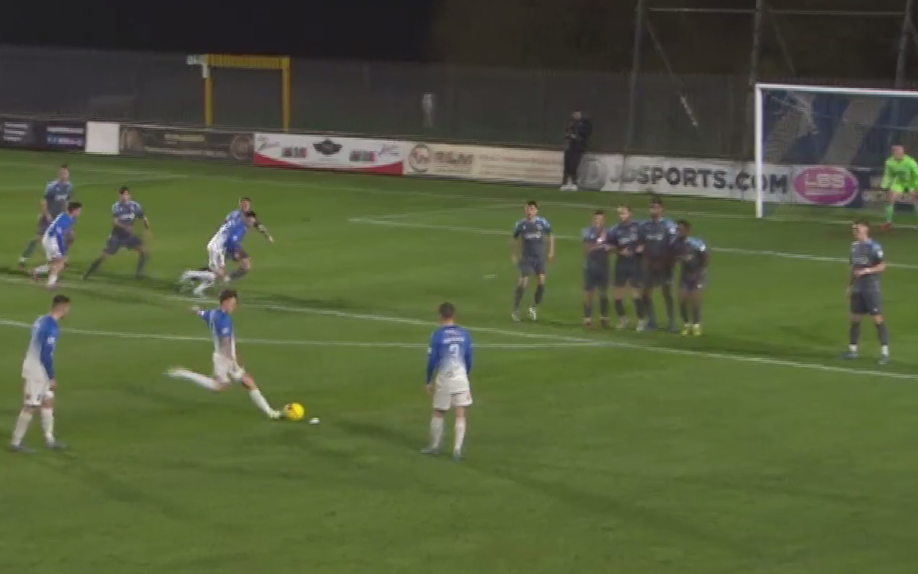 HAVERFORDWEST County earned their third straight win on Friday (Dec 2) as they beat Penybont 2-1 at the Ogi Bridge Meadow.

It was their first game since November 19, a 2-1 win away at Airbus, and Tony Pennock’s side were looking for a win to move themselves up the table.

There were early chances for the Bont with Whitmore and Kosta Georgievsky, the latter seeing the ball fly over the bar.

In the tenth minute the ball was laid off for Rhys Abbruzzese who sent a cross into the box and Elliot Dugan was in the right place to divert the ball into the net for his first goal for the club.

Lee Idzi then denied another effort from Whitmore while at the other end, Harri John made space to shoot but saw his effort saved.

In the 33rd minute, Ben Fawcett won a free kick in a dangerous position. Jamie Veale stepped up and curled the ball into the top left corner of the net to double his side’s lead.

There was another chance for the home side but Jordan Davies glanced a header over the bar and the Bluebirds went in at the break with a two-goal lead.

Early in the second half there was a chance for Bont as Nathan Wood shot on the turn but it went over the bar.

Dugan then had another chance for the Bluebirds but saw his effort tipped over by the Bont keeper.

The Bont thought they had pulled a goal back in the 80th minute but Georgievsky’s effort was ruled out for offside.

In keeping with the amount of time being added on at the World Cup, eight minutes were shown at the Bridge Meadow.

In the third of those the Bont were given a penalty and Nathan Wood converted from the spot to pull a goal back.

Any hopes the Bont had of snatching a draw were dealt a blow three minutes later as Mael Davies was sent off and they would finish the game with ten men.

The Bluebirds held on for the win and the three points moves them up to seventh place in the JD Cymru Premier.

Haverfordwest are next in action on Sunday, December 11, when they make the trip to Newtown, who only sit below them on goal difference, for a 2:30pm kick off.