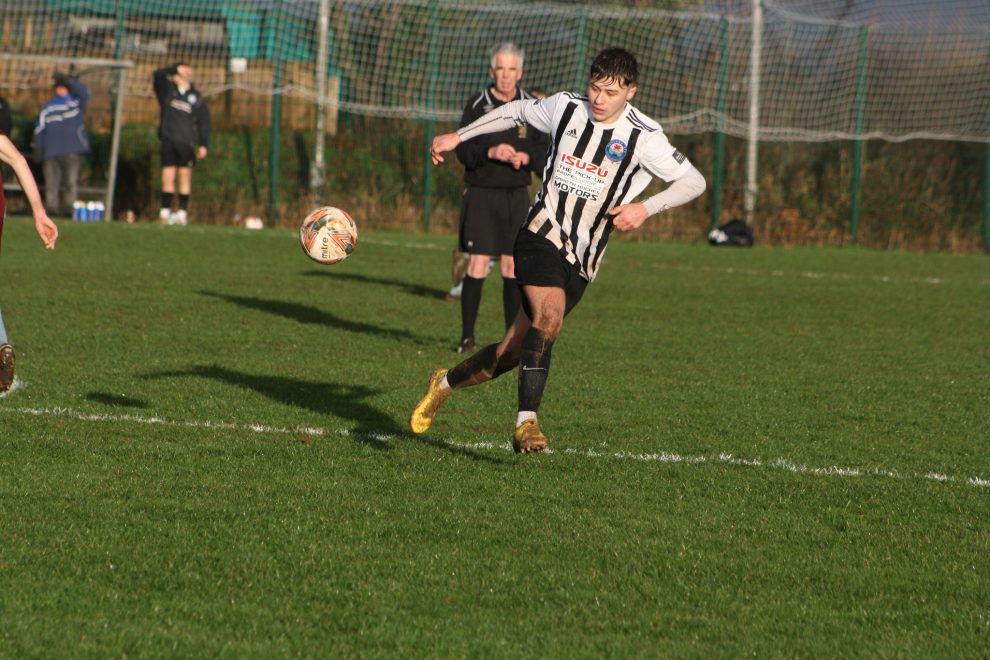 NEYLAND boosted their hopes of staying in Division 1 of the Pembrokeshire League with a thrilling 5-3 win over St Clears on Saturday (Jan 7).

The two sides occupied the two relegation spaces at the start of play but both served up an exciting game which was only settled late on.

Rain, hail and wind battered the pitch throughought the game which made it difficult for both sides.

It was Neyland who took the lead in the 20th minute when Sean Hannon’s deflected cross fell into the path of Fletcher Picton who headed in at the back post.

However, from the kick off, Nathan Evans could see that Neyland keeper Patrick Hannon was off his line and his shot from the half-way line flew into the net to level the game.

Ryan Thomas then shot over for the Saints but soon after the home side regained the lead.

Josh Watts’ cross was punched away but when the ball was played back in, Picton saw his shot saved onto the bar before Max Bowman-Davies poked the ball in.

The lead only last four minutes as Jamie Thomas’ cross was poked in at the back post by Dorian Davies.

A brief hail-storm forced a stoppage in play and the players went off while the weather subsided.

When play resumed St Clears had shouts for a penalty but Jon Seeley was booked for diving. Fletcher Picton then saw a shot go wide abd the half came to a close with the sides still locked at 2-2.

In the second half, it was the Saints who started well and there was some neat play between Evans and Thomas which resulted in a chance for Thomas but his shot was saved.

A Saints free kick also hit the post but they were soon made to pay for their missed chances as Neyland regained the lead.

The ball was played through to Picton who couldn’t get a shot away and after turning he played the ball to Sean Hannon who fired into the bottom right corner of the net.

Back came the Saints and just six minutes later they were level once more. A free kick into the box wasn’t cleared and the ball fell to Jason Baxter who scored to level the game at 3-3.

But, just three minutes later Neyland were back in the lead. Aidan Rees’ corner from the left flew all the way in with the help of the wind.

Picton then saw a shot saved before the home side finally made the game safe late on. Mike Chandler played the ball in to Picton who had time to pick his spot and he lofted the ball into the net.

Both sides saw a man sent off late on while Neyland’s Corey Richards had a late chance to put the icing on the cake but his free kick was tipped over by the Saints keeper.

The win lifts Neyland up to ninth place in the table, while St Clears remain bottom.

On Saturday, January 14, Neyland travel to Fishguard, who are one place above them in the table, while St Clears host Carew.

Are these the WRU’s young break-through stars of 2023?
Tipuric leads Ospreys against Leinster as La Rochelle hosts Toulouse in HUGE domestic weekend