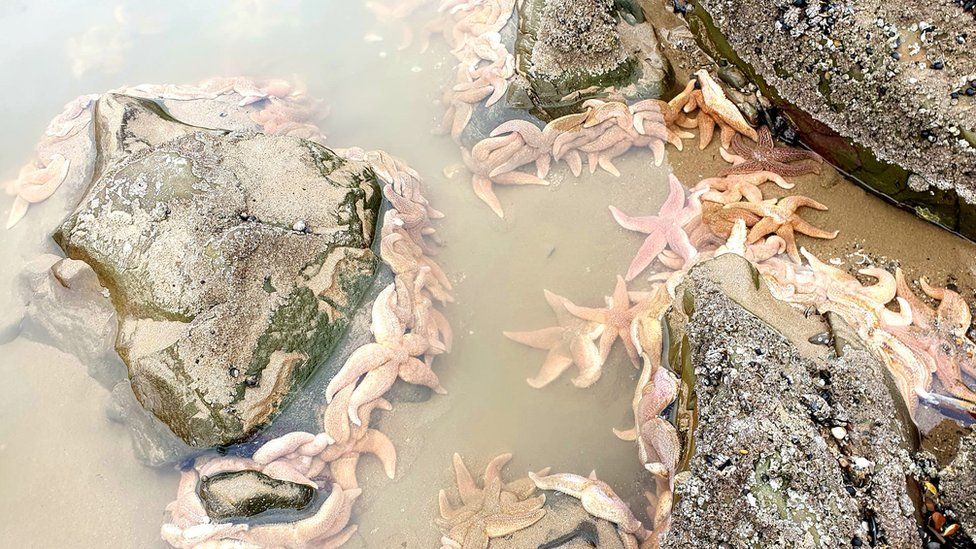 THOUSANDS of starfish have been found washed up along the coast. A beach in Scotland saw similar sights last November following bad weather from Storm Arwen.

“It’s really sad to just see that in nature, because you’re looking at deaths in the thousands of one species,” he said. “I have never seen something like this before.”

Mr Davies claims there had been reports of starfish stranded on beaches from Coppet Hall all the way up the coastline to Tenby.

“That would kind of make sense because Tenby is the first place where the tide turns in Wales, so when you get strandings they come to shore generally in that area,” he said.

“But it’s the sheer volume, you’re always going to get winter tides where stuff will come ashore.

“For that volume to come ashore, no, something seriously has gone wrong with nature.”

Jake Davies, a marine biologist who works for the Angel Shark Project Wales, said large storms are often the cause of such events.

“This type of event of stranding does occur following a big storm along with big tides,”  Mr Davies said.

“Every year there are images of large strandings of starfish coming ashore.”

“A similar event was seen on the Gower beach [last] year where rock pools were full of starfish.”

Honey Foxx French, aged 9, spent her morning returning as many of the starfish as possible back to the sea and surrounding water.

Honey was upset to see so many stranded starfish drying out, so put her efforts into moving them from rocks into deep rock pools.

Her mother, Jessica Foxx French, told The Herald she had “never seen it so bad!”