Rishi Sunak is having an identity crisis 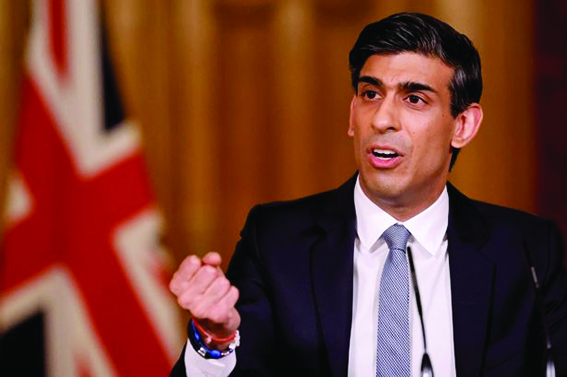 Is anyone reading this piece a friend of Rishi Sunak? Because someone needs to check up on Rishi. If you’re his mate, give him a call to make sure he’s OK.

The Chancellor of the Exchequer has been displaying some slightly worrying behaviour of late. In his budget speech on Wednesday, Rishi delivered a very sound homily to the Tory backbenches about what lousy rotten things high taxes are, how we shouldn’t be asking the Government to do everything for us, how the state is getting far too big etc. etc.

Then for the rest of the hour he chucked money about like Nye Bevan on crack, while clawing bits back here and there with the sort of stealth taxes no-one notices until about ninety minutes after the Chancellor sits down. It was the sort of budget Gordon Brown would have been proud of.

Even if the outcome is less New Labour than a situation Nye might have recognised and endorsed. Leviathan is back. Public spending is at its highest level for forty years. The tax burden hasn’t been so high since the 1950s.

The fiscal landscape has, of course, been heavily napalmed by the pandemic. But, as the Chancellor’s luck would have it, the damage isn’t quite the holocaust we anticipated. Jobs have held up. Business is bouncing back. The Office for Budget Responsibility, Rishi gaily confirmed, has revised its gloomier forecasts and now thinks that Covid will only knock 2% off GDP.

What he didn’t mention is that the OBR also reckon Brexit will slash growth by 4%. However, this wouldn’t have cheered Boris or the Conservative back benches up much, so was best left unsaid.

Instead, Rishi did a sort of schizophrenic Sméagol/ Gollum double act through his speech, hissing that he hates nasty big governmentses; then hurling £150bn in the general direction of schools, transport infrastructure and the black hole full of angels that is the NHS. “We spendses it, we does, we spendses it my Precious!”
For now, public spending is the Precious, and the Tories are completely in thrall to its power. Treasury Secretary Simon Clarke said afterwards that the budget represented a philosophical shift for the party: “What we want to see is to get the economy turbocharged, unlock productivity, and to deliver growth more evenly across UK. That does require some upfront spending.”

What they really want to see is Kier Starmer horribly embarrassed. And he would have been, had he not been sitting at home with the Covid, against which Labour’s practice of ostentatious public mask-wearing doesn’t seem to have proven a terribly effective prophylactic.

Since Brexit, the Tories have done a very effective and rather Blairite job of stealing their opponents’ clothes. The budget continued Boris’s campaign of marching his troops up and down the red wall, selling the Conservatives as the party of working folk. Although previous Tory policy had been to wean people in work off tax credits, Rishi lowered the taper rate on Universal Credit from 63p in the pound to 55p. He dispensed with the public sector pay freeze. He raised the ‘national living wage’ (as the minimum wage is now called, to the intense annoyance of campaigners for a national living wage) from £8.91 to £9.50 an hour.

The worry, of course, is that Gollum is leading the Tories towards some sort of monetary Mordor; the seething Mount Doom in the heart of which is the ancient, almost forgotten cauldron of inflation. Who pays for Rishi’s bounty? As a no-bullshit woman in Morpeth observed on a Radio 4 vox pop immediately after the budget speech, “if everybody’s wages go up, the cost of living is going to go up.”

Which it already is. Inflation is going to hit 4% this year; way above the Bank of England’s target. And, as anyone who isn’t the Queen and actually has to get some cash or a credit card out occasionally will have observed, real inflation feels a good deal higher than that. The economy is running hot, and the only lever the Bank of England has to control inflation –putting up interest rates– is one the Chancellor hopes to goodness the Bank won’t pull. Those wage rises won’t look like much if prices and mortgage rates outstrip them.

A couple of things in the Budget gave you some hope Rishi might be conservative at heart. He did put a mite away towards debt reduction, even if, given the current level of debt, this was a bit like a hypothetical 10-year-old Rishi saving towards a Westminster education by putting £1 a week away in a piggy bank. He reduced the stupid tax surcharge on bank profits by 5%. A planned increase in business rates was deferred (local authorities having presumably already budgeted to spend it). He froze fuel duty, again.

This last measure, together with a cut on domestic air passenger duty, gave the budget –even in the immediate run-up to COP 26– a general flavour of “f**k climate change” which the back benches liked. That said, if Rishi is looking for a clean, zero-carbon source of power to keep the lights on over the decades to come, he could do worse than getting someone to hook a turbine up to Margaret Thatcher’s grave.

So will the real Rishi Sunak please stand up? Is it the fiscally responsible Thatcherite Sméagol, or Gordon Gollum? If you care about Rishi –and indeed the economic future of the country– it might be useful to find out.

Badger goes for a paddle.