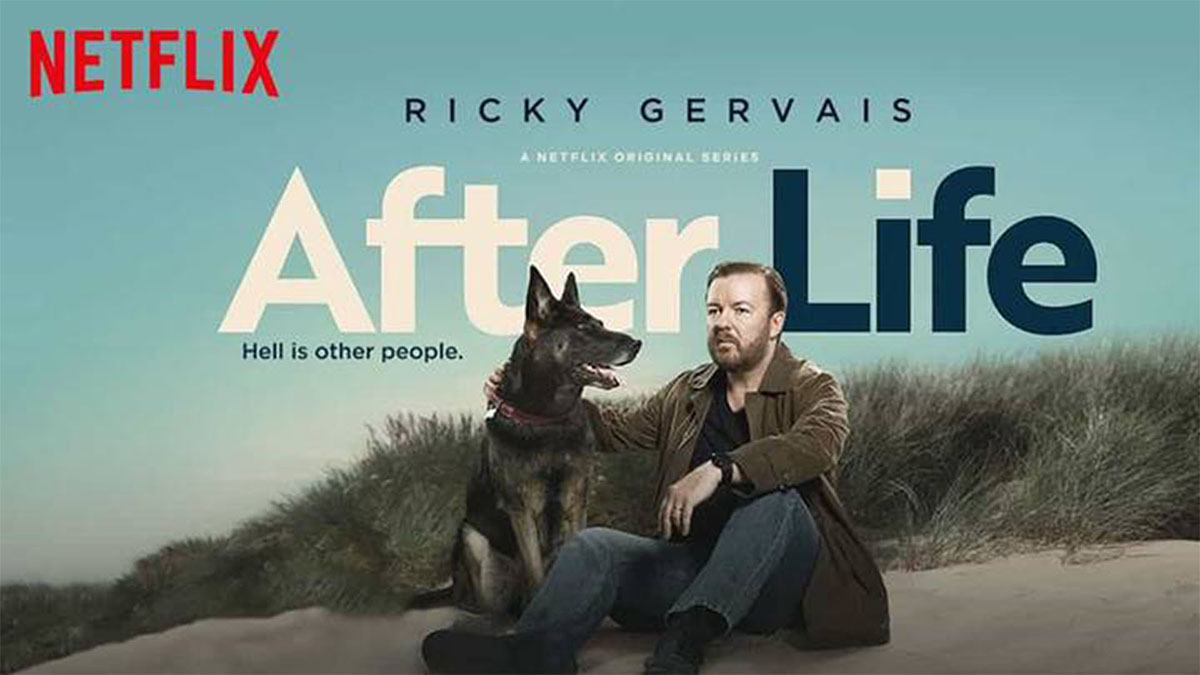 RICKY GERVAIS is very much like Batman…..bare with me, and I’ll explain.

In ‘The Dark Knight’ Batman takes the blame for Harvey Dent’s death thus saving his legacy and preventing Gotham from descending into madness by sacrificing his own reputation as Commissioner Gordon calls him ‘The hero that Gotham needs right now’.

Now, every few years a new Gervais comedy arrives and changes everything for the better.

The Office killed sketch comedy for the best part of ten years and made fly-on-the-wall comedy shows both relevant AND hilarious.

Extras allowed us to peek behind the curtain of showbiz and we found a world of washed up stars, awful agents and egotistical actors. It also ran deep with themes surrounding the negative side of fame and, lets be honest, watching major stars like Kate Winslet, Patrick Stewart, Sir Ian McKellen and Daniel Radcliffe happily make themselves the butt of the joke is infinitely hilarious.

Derek stripped all the stardom away and we saw for the first time that Gervais could write and star in something that, whilst being hilarious, could also pack one hell of an emotional punch.

It also showed that it was possible for Gervais to portray a far simpler character than both Brent and Milman, a character that was focused on kindness, being helpful and, above all, selfless.

Even Life’s Too Short changed things. It showed how it was possible to make a show based around Warwick Davis where his height wasn’t the joke, his character and his adventures were the joke, the fact he has Dwarfism was kind of unimportant.

After Life, which has it’s third and final series hitting Netflix soon, has kind of served as a re-awakening of people suddenly remembering exactly how talented Ricky Gervais is.

After Life tells the story of Tony, a man struggling with grief after the death of his wife from cancer.

His reaction to this tragedy is to simply shut down, to lock everything and every one out. Becoming depressed and even considering the unthinkable, he decides to combat the dark place he finds himself in by saying and doing whatever he feels like and, if it all gets too much, he has a way out.

Many people find themselves in Tony’s firing line, from a poor unfortunate ginger kid at school to his postman, his boss and even the local prostitute…sorry, sex worker.

Gervais has crafted something so layered here that people don’t really understand the jokes.

Yes, he says offensive things to people but it all stems from immense feelings of grief and his own inability to deal with it.

When he’s responding to jeers in a playground, he isn’t threatening a child, he’s externalising some of the anger, rage and sadness he feels but what causes offense is that Tony genuinely doesn’t care who is in his sights.

Anyone who watches this show and doesn’t intimately understand both grief and depression will probably walk away from this in awe of Gervais for writing a fresh, modern comedy that is unafraid to joke about anything, I mean that by the way, if you’re easily offended then After Life is not for you.

Anyone who watches After Life having experienced grief and depression will, I feel, get this show more. Yes, Tony is party to some horrible things, from assisting a suicide to dabbling with hard drugs and even hanging around with a prostitute….sorry, sex worker.

But none of those things are the point. Simply put, this show is about a man who loses everything, yes his wife’s death is a tragedy but he loses himself, his humanity and his emotion to the darkness.

However, through the series he finds bits of himself scattered across his life and slowly pieces himself back together and, by the series end, he’s found himself again. And in a world more open to conversations about mental health, THAT is a tale that needed to be told.

But it needed to be told with humour, with pain and with a deep understand of how someone recovers and heals from something that scars your soul.

Gervais is the hero that we all need at some point in our lives. But less of my jibber jabber, go check it out, you’ve got 2 series to go and a third around the corner. Great!

The most haunted places in Wales

Concert will be showcase for musical stars of future