16 AND 17-YEAR-OLDS will now be able to have their say at key church meetings following a motion passed last week. For the first time, under-18s will be able to become members of Diocesan Conferences and play a full part in their decision-making. The motion was passed with strong support by the Church’s Governing Body at its meeting last week.

It had been brought as a Private Members’ motion by the Archdeacon of Montgomery, Dr Peter Pike, and seconded by lay member, Dr Huw Lloyd – both from the Diocese of St Asaph. Proposing the change, Dr Pike referred to the Scottish referendum taking place that day at which younger teenagers were also allowed to vote. He said, “Those between the ages of 16 and 18, who will be voting for the very first time today, are being consulted and invited to make up their minds in a mature manner about a range of complex issues.

They are being respected for the energy and insight that they bring to life in Scotland. “Our Private Members’ Motion asks for something similar: that our young people aged 16 and over have the opportunity to take a full part in our six Diocesan Conferences. He added, “The young people of this age group are established and gifted in life, and have all sorts of perspectives on things which we who are older have either dulled or forgotten. But I wonder if our over cautious, utterly sensible and mildly hierarchical approach to governance in our church life has resulted in a huge blind-spot for those who would have so much to offer?”

During a lively debate, Carol Cobert, a lay representative from Llandaff Diocese, reflected that experience isn’t everything, telling the hall in Lampeter, “We have been making decisions for years and we still get it wrong!” Others commented that lowering the age of service would encourage young people to take part, “Giving young people responsibility will encourage participation, ” said Ros Crawford, a lay member from St Asaph Diocese. 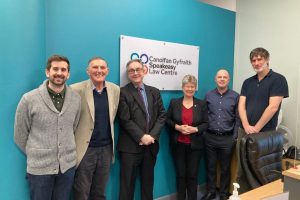