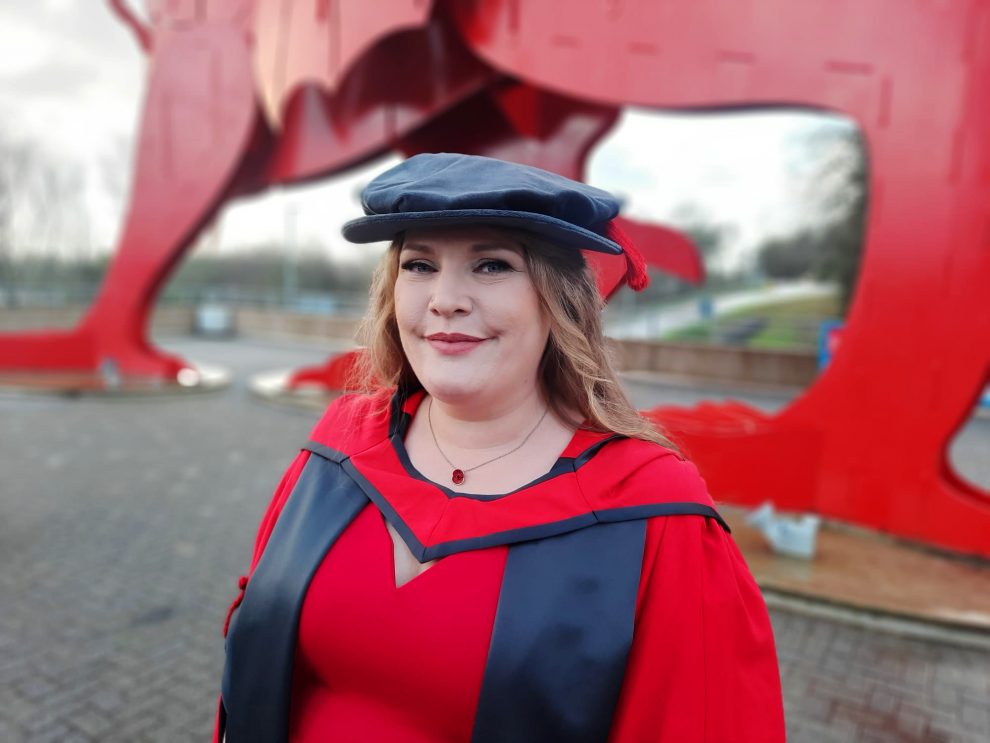 A MUM of three who survived a serious sexual assault as a young teenager has written a novel based on her experience – and will this week graduate from the University of South Wales with a Masters degree in Creative Writing.

Donna-Louise Bishop, 37, from Norwich, Norfolk, returned to USW to pursue her Masters degree after falling in love with South Wales as an undergraduate student.

“Believe it or not, I absolutely hated English at high school!” said Donna-Louise, who is mum to nine-year-old Adam, eight-year-old James and five-year-old Harrison.

“Then I got to the end of my A-levels and found out that I could study Creative Writing as a degree. So, I went back to college to get my English A-level (in just one year rather than two) and was able to enrol onto the Creative and Professional Writing degree at the then University of Glamorgan, where I graduated from in 2007 with a first-class honours.”

“I absolutely loved my time as an undergraduate student, and although I’m proudly Norfolk born and bred, it’s no secret that my literary heart belongs to Wales. Cymru am Byth!”

As a journalist and correspondent for the Eastern Daily Press – currently its dedicated obituary writer – Donna-Louise spends her day telling other people’s stories. But it was her own, harrowing experience of being groomed by an online predator at the age of 14 that inspired her latest project, a novel entitled On the Other Side.

After returning to study in 2016, she came back to USW for the MPhil in Writing, and embarked on a five-year journey that saw her deal with her fair share of obstacles.

“I’ve gone through many ups and downs since the start of my Masters,” said Donna-Louise, who is also a tutor for Norfolk County Council’s adult learning team. “On a larger scale, there was the Covid-19 pandemic, but closer to home I experienced an unexpected pregnancy in 2017 and the breakdown of my marriage the following year, which resulted in getting divorced. I also have Crohn’s disease and was diagnosed with severe anaemia and anxiety.

“But thankfully I had so much support from my supervisors, Barrie Llewelyn and Professor Diana Wallace, to my brilliant fiancé Allan and my wonderful parents, who have all been my biggest cheerleaders. I couldn’t have done this without them.”

As part of her Masters degree, Donna-Louise was keen to use her experience of sexual abuse as the basis for her thesis, following on from a project she began as an undergraduate.

She said: “Writing was a really cathartic process to work through what had happened to me, and I became intrigued by the way in which fiction deals with trauma, and how women are represented through narrative voice.

“This work helped me to write my novel, which as well as being a coming-of-age story also deals with what happens to a young girl, aged, 14, after a serious sexual assault. It also looks at the impact that it has on her family, how it is viewed by those around her and as society as a whole.

“When you’re groomed as an individual, you’re not aware of the wider context of what’s actually happening to you, and it wasn’t until I was writing my novel that I realised the extent of what I’d been through. As a teenager I fell into the trap of thinking that I was living some kind of love story, but from studying literature for my thesis I realised that it was far from it – what happened to me was horrible, but what I realised was that I wasn’t alone.

“I was able to start to come to terms with what had happened, and doing the Masters really allowed me to explore that and find peace with it, which as a result means I am able to help other people. I want to help other survivors, to give them a voice so that they aren’t frightened to speak up about what’s happened to them.”

Having studied part-time throughout the Covid-19 pandemic, with three sons to look after and dealing with her own personal trauma, Donna-Louise feels an even bigger sense of achievement to be graduating with a Masters degree. She has since received counselling from Norfolk-based charity the Sue Lambert Trust, who provide support for survivors of sexual violence.

“The most challenging thing while studying was going from reading some really heavy texts – not just about sexual assault but trauma among soldiers suffering from PTSD and trauma facing minority groups around racial issues and sexuality – to having to be a happy and positive mum to the boys,” she said. “It was such a dark topic that took a lot from me, but I gained a lot from the experience as well.

“Being a mum of boys, I feel a strong responsibility to bring up young men who are supportive of women and who will speak up in the right way. Dealing with sexual assault has made me very conscientious about making the boys aware of consent, which is such an important issue to be teaching our young people.

“There was a very real moment when I thought I would never get to the end of my course, but receiving an email to say I’d passed has honestly been the highlight of my life,” she said. “I love being able to say to my children, yes it’s tough, really tough in fact, but with good support around you and determination, you can achieve the impossible.”