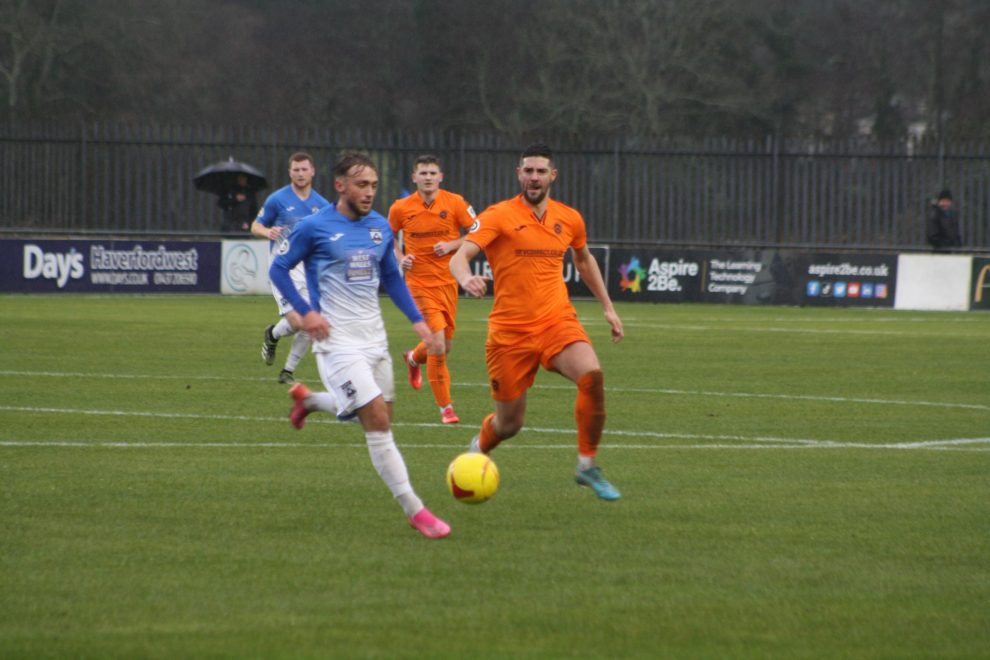 HAVERFORDWEST County earned a point on New Year’s Eve (Dec 31) as they scored late on in their game with Pontypridd United.

Elsewhere, Flint held title-chasing Connah’s Quay Nomads to a 0-0 draw while TNS earned a big win over Airbus to extend their lead at the top of the table to six points.

Pontypridd had beaten the Bluebirds on Boxing Day after a late winner and it looked as if they were going to make it a double at the Bridge Meadow on Saturday.

Clayton Green’s goal early in the second half put them ahead on a wet afternoon in west Wales. It looked as if they would hold on for victory but as the clock ticked on to 90 minutes, Ioan Evans’ free kick proved too hot to handle for the United keeper who couldn’t hold it and the ball fell into the net.

The point keeps the Bluebirds in seventh place in the table five points off sixth-placed Penybont. However their chances of catching the Bont look slim as the Bluebirds have played two games more and also have Connah’s Quay and TNS to play.

TNS earned an 8-0 win away at Airbus. The league leaders put seven past the bottom side on Boxing Day and they went one better on Saturday.

Ryan Brobbel scored two early goals and Daniel Davies made it 3-0 after 18 minutes. Brobbel then completed his hat trick and Ashley Baker then made it five after 40 minutes.

Things went from bad to worse for the home side as George Peers was shown a second yellow and then a red card.

Ben Clark then made it 6-0 on the stroke of half time. Daniel Redmond scored six minutes into the second half and sub Jake Canavan added the eighth with just over 20 minutes to go.

Connah’s Quay Nomads beat Flint 2-0 on Boxing Day but they could not be separated on New Year’s Eve as their game finished goalless.

Penybont and Cardiff Met drew 0-0 in their game on Friday night.

There are three fixtures on Tuesday, January 3, as teams play their games in hand. Caernarfon host TNS and Penybont face Airbus.