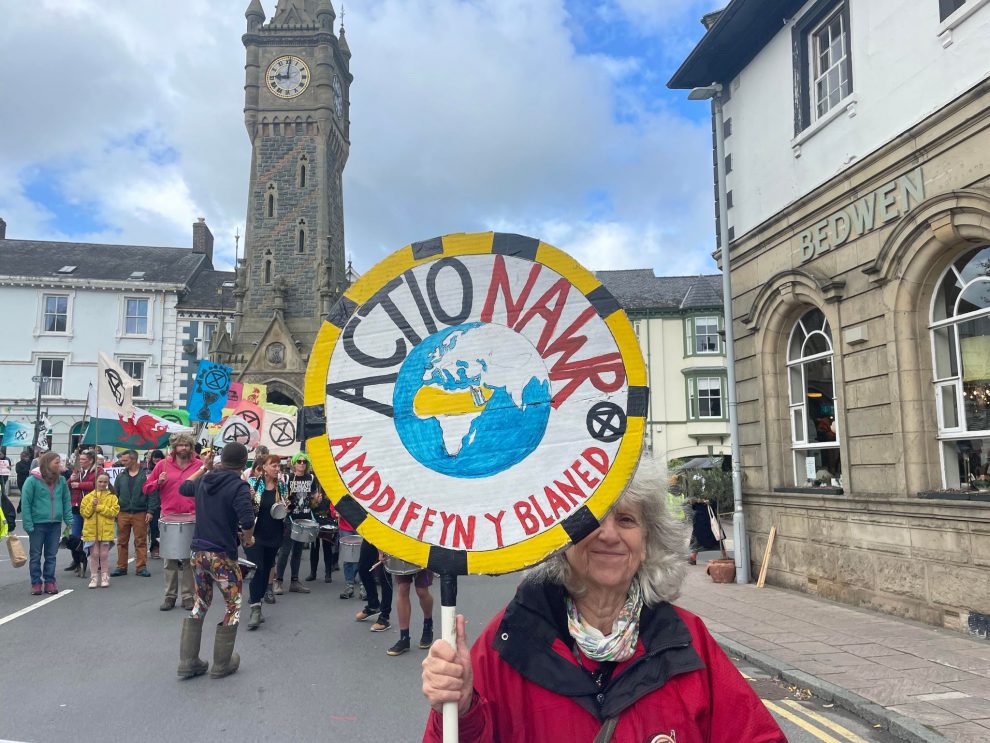 People from across Wales were drawn to take part in events in Machynlleth including a Sleepwalking into Extinction Climate and Community procession.  Over 100 participants carried banners mourning species loss in Wales, and calling on a seemingly uncaring Westminster Government for fair working conditions and to act appropriately on the cost of living.  Extinction Rebellion (XR) Members walked in solidarity with those of the RMT and others who displayed their Union banners.  The march was supported by one of three XR buses touring the UK and holding People’s Assembly’s.

A pause on Maengwyn Street marked the tenth anniversary of April Jones’ disappearance and honoured her memory, as well as acknowledging the children that disappear daily from refugee camps and situations causing displacement through climate disaster.

Ninety people stayed for the People’s Assembly’s at the Owain Glyndwr Centre – ancient parliament seat of Wales.  The process work as a deliberative democracy tool to collect ideas and come to decisions.  Members of the public, local bodies and County and Town councillors took part.

Sixty eight people engaged in the whole process, listening to and questioning expert witnesses on the Cost of Living, Climate/Ecological and Energy crises. Climate justice for poorer countries and the care of minority groups were also highlighted.

Break out groups explored how might we respond to the crises we face together.  Issues discussed included skills, land, food and tool sharing, free buses, nationalising services; making, growing and recyling locally so we dont impact on other counties, proportional represenation and more People’s (and Citizen’s) Assembly’s for making decisions.

This experience using one evolving method of fair and sensible decision-making engages and empowers people directly in the democratic process.  Citizens Assembly’s (where people are chosen at random to participate) have been used successfully in South Africa and Ireland.  XR are one of a number of organisations calling on governments to use Citizens Assembly’s for decision making.

All of the People’s Assembly conclusions of the tour will be collated for Westminster and devolved governments, demonstrating what people feel strongly about and need from their representatives.  A useful resource for our politicians perhaps.

With thanks to all who came from XR Machynlleth.