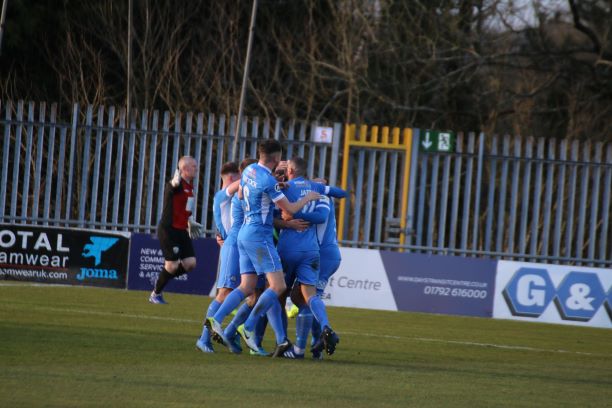 HAVERFORDWEST COUNTY will not be able to play European football next season after the club declined to apply for a UEFA Club licence.

The club does not have a coaching staff member with a Pro Licence, nor are they on the course, and therefore they cannot compete in Europe.

In a statement, the club said that they could have appointed someone with a pro licence but this would have meant current manager Wayne Jones being demoted, something which they did not want to happen.

The Bluebirds currently sit in sixth place in the JD Cymru Premier table and if they were to finish there at the end of the first phase of the season, they would go on to compete for a guaranteed place in the season-ending Europa League playoffs.

The Club added that coaches can apply for a UEFA Pro Licence every two years with the next applications being open later this year.

A spokesperson for Haverfordwest County said: “Further to the FAW UEFA Club Licencing application for clubs for the 2021/2022 season that were to be submitted by January 31, 2021, the club had declined to apply on this occasion meaning that we are not eligible to play in European Competition next season or be eligible to compete in the play offs should we finish 7th or higher.

“Despite the club meeting a majority of the licence requirements (with many able to be resolved by the deadline), the club does not have a coaching staff member with a Pro Licence, or currently on the Pro Licence course.

“The club could have obviously recruited for such a person but this would have required a demotion of current First Team Manager Wayne Jones, and the Board of Directors made a very easy decision that this is something that we did not want to happen.

“The fact we are having to post this statement is a credit to Wayne and his team. We want nothing more than to be competing in Europe with Wayne as our First Team Manager as is our three-year plan. However, with our league position as it stands, we are effectively falling victim of our own success.

“The club are working with the FAW to ensure our licencing requirements are met for the 2022/2023 season, and we are extremely confident of having everything in place to obtain our licence and compete in Europe, should we be in a position to qualify. Coaches can apply for a UEFA Pro Licence every two years, with the next applications being open later this year.

“The players will remain focused to firstly ensure our Cymru Premier status, and secondly to finish as high up the table as possible as we prepare for next season as we continue to build an exciting project at The Bridge Meadow Stadium.”

Haverfordwest County are next in action on Saturday, March 20, when they travel to league leaders Connah’s Quay Nomads.