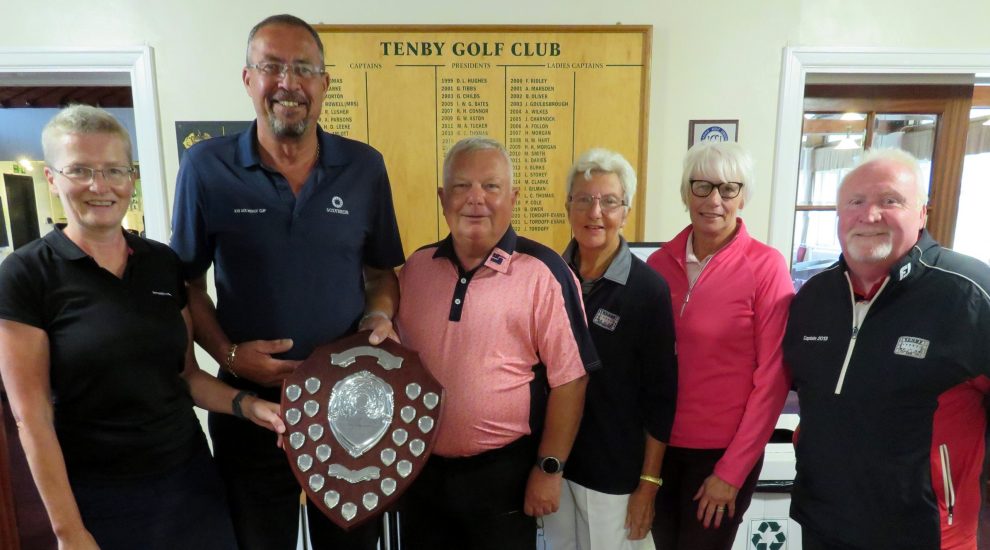 125 ANNIVERSARY SHIELD: After all the lovely sunny weather we have enjoyed all summer, today’s rain and wind was rather a shock to the system. Eighteen couples were down to play in this greensomes mixed medal, but unfortunately two men had to pull out due to injuries. Many thanks to Trevayne Keohane and Diana Dredge for going out anyway to mark their partners’ cards.

Three pairs won back their entry fees in the draw. They were John Richards and Rita Collins, Jerry Whitehouse and Sarah Phillips, and David Morgan and Laura McQueen. Also, only two twos were recorded, winning a sleeve of balls each. They were Chris and Carol Beecher on the 6th, and John and Rita on the 17th.

Despite the strong winds and intermittent rain, there were some good scores. Taking third prize with 88/16/72 were Paul James and Georgina Ormond. The presenters of the shield, Chris and Carol Beecher and 2020 winners, were sitting in first place, with 91/20/71, but were pushed into second place with the last pair in. John Ball and Maria Smith are beginning to look like a formidable pairing. With a 40 gross on the back 9, which included an eagle on the difficult 16th and a birdie on the 18th, with 88/23/65, they were our 2022 Shield winners.

The last fixture on our calendar for this year is the Charity Mixed on Thursday 29th December, when we try to put some money in the new captains’ charities. We like a full house, so please put the date in your diaries. We also have two friendly matches coming up. The first is against Ashburnham away tomorrow (4th), and the second is away against St Pierre on the 2nd of October. (The sign-up sheet for this is on the Mixed noticeboard on the back wall.)

Thank you to Ryan in the Pro Shop, Laura in the office and the catering team for their help today.

Goodwick come from behind to beat Clarbeston Road
Preview: Pembs T20 finals day set to be a blast