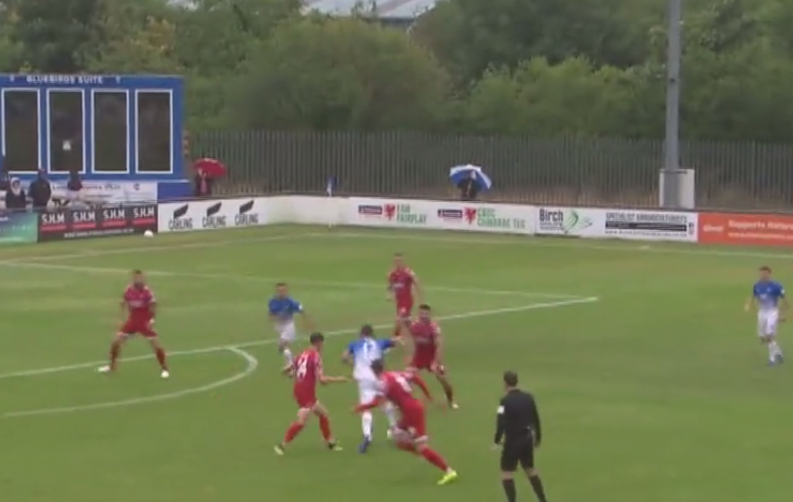 HAVERFORDWEST County ended up on the wrong end of a 3-2 scoreline for the second time in a week as Newtown came from behind to beat the Bluebirds at the Ogi Bridge Meadow.

Things did not go the Bluebirds’ way after the break, though, as a brace from Aaron Williams helped the visitors to turn the game around and take all three points.

Manager Pennock selected the same starting 11 from the game against Penybont earlier in the week, with the returning Lee Idzi – who completed a return to the club this week – taking his place on the bench, along with Ricky Watts, who missed the game in Bridgend through injury.

In testing conditions, the hosts started well and had the first opportunity of the game when Rees glanced a header wide from Jamie Veale’s corner.

After fouls on striker Ben Fawcett had earned Ryan Sears and George Hughes a yellow card apiece, Pennock’s side took the lead after a quarter of an hour when a headed clearance fell into the path of Rees, and he showed excellent technique to unleash a first-time volley which flew into the bottom left corner past the helpless Dave Jones.

This goal gave the Bluebirds a confidence boost, and they could well have doubled their advantage seven minutes later when Jordan Davies got to the byline and squared to Rhys Abbruzzese, but the full-back’s first-time effort whistled over the crossbar.

Chris Hughes’ side began to grow into the game as the half wore on, and they found an equalising goal when Nick Rushton’s cross into the area picked out the unmarked Robles who headed home to make it all square.

The momentum had swung the way of the Robins following the goal, and they could have taken the lead as Hughes’ ball into the area was deflected on to left post by the outstretched leg of Lee Jenkins, with Zeli Ismail shooting just wide shortly after.

It appeared that the teams were going to head into the break level, but, just as they had done last weekend against Airbus UK Broughton, the Bluebirds struck in first-half stoppage time when Ryan George crossed to Fawcett, and he swept the ball into the path of Wilson who prodded home from close range to give County a 2-1 half-time lead.

With the momentum shifting again after Wilson’s second league goal of the season, Pennock’s side came close to doubling their advantage two minutes into the second-half, but midfielder Jamie Veale lost his footing on the wet turf as he prepared to direct Wilson’s cross on goal.

Jordan Davies then got a shot away from a tight angle which forced a save from Jones as Haverfordwest County searched for a third goal.

Newtown remained in the contest though, and shortly after the hour mark they equalised for a second time when Williams produced an acrobatic effort from inside the area to set up a grandstand final 30 minutes or so.

Both teams had opportunities to swing the match their way after this, with Rushton’s snapshot from inside the area saved by Zac Jones, before Jordan Davies’ shot from a similar angle was saved at the near post by Jones.

However, with just over five minutes left on the clock, the decisive moment went the way of last season’s third place finishers when Hughes’ shot rolled into the path of Williams, and the forward reacted to divert it home and hand the Robins all three points.

The Bluebirds are next in action on Saturday, September 10 when we travel to Park Hall to take on reigning champions The New Saints.

The game kicks off at 5.15pm, and will be shown live on Sgorio via their digital platforms on Facebook and YouTube.