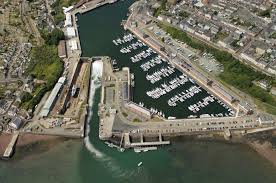 AT TUESDAY’S Planning and Rights of Way meeting, councillors voted to visit the site of the proposed Milford Docks master plan. A number of concerns were raised about the multi-million pound project and how it will impact the town of Milford Haven. The outline plans include proposals to build up to 160 new homes and new retail facilities, but they have come under criticism from local residents. The vote means that a decision will not be made until the February meeting of the committee. One of the main concerns centred on the old docks office, which would be demolished to make way for a new entrance.

Cllr Stephen Joseph accused the Port Authority of using ‘big boy bully tactics’ to bring its plans to reality. He added that the manager of All Pets Vet Care, the company currently in the office, had been told they would be moved to a new building, but nothing has been suggested. Cllr Joseph added that the plans have changed on numerous occasions saying it ‘doesn’t seem like a finished idea’. One local resident who spoke against the project said that she was concerned that the committee did not feature a representative from Milford Haven.

Development manager Mike Simmons added that the department’s recommendation to approve the plans had not been taken lightly. Concerns were also raised about the proposed new multiscreen cinema and the impact this might have on the Torch Theatre. Port Authority Chief Executive, Alec Don welcomed the visit by the planning committee, and said it would be a good chance for them to gain a better understanding of the area. The plans have been in the pipeline for nearly three years and the Port has already had a meeting with the Milford Haven Town Council about the proposed plans.

Where will the next refinery closure be?
Haverfordwest: Gloucestershire man ‘groomed and took child out of county’, court hears
Comment