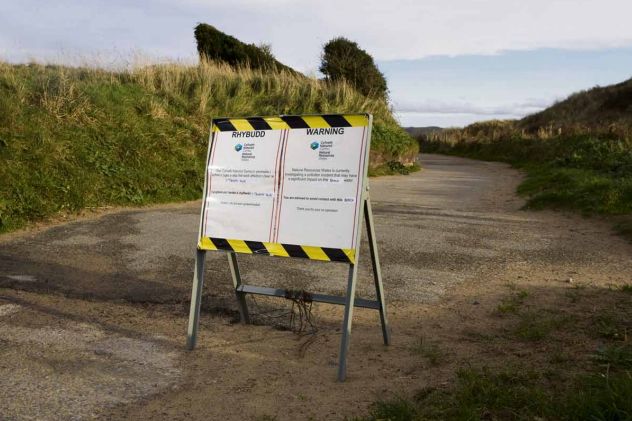 THE IDYLIC and popular beach of Freshwater East had a mysterious substance washed to shore with the incoming tide on Saturday afternoon.

A number of people alerted the authorities when they noticed the unusual substance close to the shoreline.

Resident, Julie Griffiths, was out walking her dog and noticed an unusual translucent liquid shimmering in the shallows.

“It was a very noticeable substance and looked potentially dangerous”she told The Herald. There was also a considerable concern for the safety of a number of surfers in the water. “There were 15 maybe 20 surfers enjoying the great waves, unaware of the dangerous substance”, a local man told The Herald. But thankfully none of them were taken ill after the incident due to the prompt evacuation by the Mid and West Wales Fire Service and Dyfed Powys police.

Mark Lewis was surfing the break with his friend Neil Thomas when the incident happened. “We were the last two to leave the water as we were surfing much further down the beach. It is pretty worrying to think what we may have swallowed if we had been in the wrong area.”

Authorities are still unsure what the substance was and if it was harmful. Results will become apparent as samples of the substance have been sent off for analysis which will determine where it may have come from, although early indications suggest it may have fallen from one of the hundreds of commercial vessels that pass by the beach every day.

The beach has now been closed as a precautionary measure until further notice and members of the public are advised not to walk on the beach for their own safety.

On attendance, emergency services personnel found some unidentified substance, which appears to have washed up on the beach. As a precautionary measure, the beach has been closed to the public whilst the matter is investigated. Samples of the substance have now been taken for analysis and identification purposes.

Members of the public are advised not to walk on the beach until further notice. If anyone has any concerns, they are advised to make contact with the emergency services or Coastguard for advice”.

In an area of outstanding natural beauty, residents are particularly concerned about this incident and The Herald urges the general public to be vigilant and careful when using the beach for recreational uses in the future.