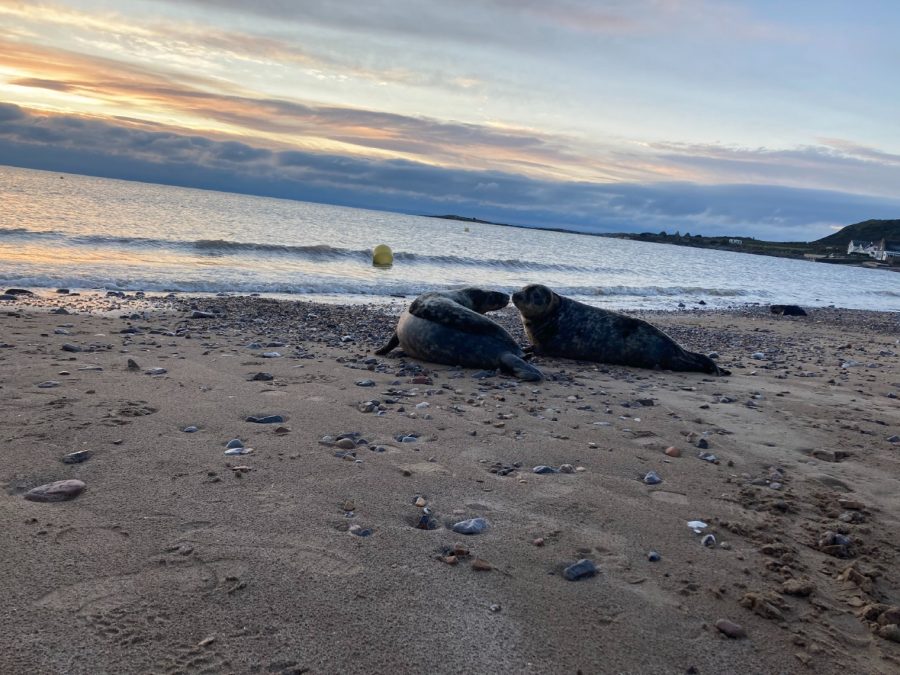 Two grey seal pups have been returned to the wild for the New Year following months of RSPCA rehabilitation.

They were released at Port Eynon, Gower, Swansea, on 3 January as the sun rose – just days into 2021 – by  RSPCA animal rescue officer Ellie West and RSPCA inspector Keith Hogben – who caught the beautiful event on camera. One seal had been originally rescued from Abereiddy in Pembrokeshire – the other from Trevone in Cornwall. They were both found in distress, underweight and with injuries.

Ellie said: “This was such a lovely release – to see them both enter the sea happily where they belong with the sun rising in the distance was just glorious. It was a lovely way to start the new year.”

The seals had been transferred to the Welsh coast from RSPCA Mallydams Wood Wildlife Centre in Hastings the previous day and had spent the night at the RSPCA Llys Nini Branch seal unit.

“These two pups – nicknamed BB8 and Luke Skywaker – have been in the fantastic care of RSPCA Mallydams Wood Wildlife Centre who have given them the best rehabilitation over the past few months. It’s always fantastic to hear when they have put on the appropriate weight and can be released back into the wild,” added Ellie.

Ellie had been involved in the initial care of the seal rescued from Abereiddy Beach back in October.

“He was a weaned pup that had pretty much moulted out all his baby white lanugo coat, so he was fully weaned, but he was found quite underweight, lethargic and had the snotty face of a sickly pup,” she said. “He also had a lump on the top of his neck.

“He was reported to myself and Keith and we asked Welsh Marine Life Rescue (WMLR) to attend who very kindly collected him and cared for him for a few days until we were able to transfer him to the wildlife centre.

“Once again we want to thank WMLR for all their assistance, expertise and all their hard work this past season. We could not do what we do without them.”

At RSPCA Mallydams Wood Wildlife Centre the seal had the lump removed under anaesthetic by the vet team.

The second seal from Cornwall came into RSPCA care in November and weighed just 16.3kg. The seal had suffered a few small wounds and was a bit wheezy, with centre staff treating him for lungworm and administering antibiotics. When he left the centre the seal – who was named Luke Skywalker – weighed a healthy 40kg.

Before release, the seals were given identification tags in their hind flippers for ID purposes. The RSPCA often receives good feedback from sightings – and the scientific results received reveal that seals that go on from rehabilitation survive in the wild.

The RSPCA advises that if members of the public spot a seal on a beach that they think might need help, the best thing is to observe them from a distance and do not approach them.

Seals are wild animals and have a nasty bite. Never try to return a seal to water yourself, as you may put yourselves and the seal at risk by doing this. It is also advised they keep dogs away from any seal and keep them on leads on beaches that have seal colonies too.

It’s not unusual for a seal pup to be alone, as seal mums leave their pups very early on in life. So if the seal pup looks fit and healthy and shows no signs of distress, it should firstly be monitored from a safe distance for 24 hours.

If you see a pup whose mother hasn’t returned within 24 hours, is on a busy public beach, or if you think the seal may be sick or injured, please stay at a safe distance and call the RSPCA’s advice and cruelty line on 0300 1234 999. An unhealthy seal pup looks thin (but not bony) with a visible neck, like a dog.

There is more information on the RSPCA website about what to do if you see a seal or pup on the beach alone.

This winter, the RSPCA expects to rescue thousands of animals from neglect, cruelty and suffering. Already this Christmas we received more than 44,000 calls to our cruelty line but the calls to our rescue line are not stopping so neither will we. To help our rescue teams continue to reach the animals who desperately need us this winter, visit www.rspca.org.uk/xmas and Join the Winter Rescue #JoinTheRescue