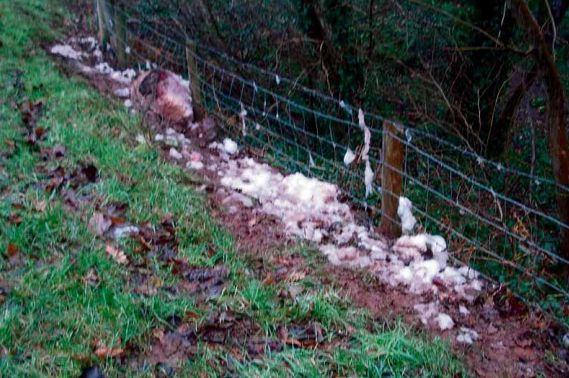 A MILFORD HAVEN farmer has asked dog owners to act responsibly after two dogs tried to eat one of his pregnant sheep while it was still alive on Wednesday last week.

Gareth Newing, of the Lambing Shed, near Castle Pill Farm, told the Herald:

“Dogs attacking sheep has been a big issue for me and my neighbours. At about 1pm on Wednesday, I had a phone call to say that two dogs were attacking my sheep. I found two Staffordshire Bull Terriers had got into the field and one of my sheep had been badly mauled. Another had its ear bitten off, and another ewe had been badly injured.

“The dogs had ripped out the sheep’s wool, pulled off both of her ears and tail and had bitten chunks out of her flesh. They were actually trying to eat her while she was still alive. She had big chunks of flesh missing and there were bite marks all over her. The owners were nowhere to be seen.

“We had to put her down there and then. We didn’t have time to wait for a vet to do it, she was too badly injured. After we had put the sheep out of her misery the dogs came back for another go”.

Farmers are legally allowed to shoot dogs on their land worrying sheep.

Mr Newing told The Herald: “I don’t have a gun myself. I’ve not wanted to shoot dogs because of the footpath right next to our farm, but I am going to have to resort to it if owners are not responsible”.

It will soon be the lambing season between February and March. Mr Newing told the Herald:

“All of my sheep are pregnant, and the one that had been killed was carrying two lambs, so we’ve actually lost three sheep. Other sheep may now miscarry due to the trauma of being attacked”.

Mr Newing added: “There are other places you can let your dog off the lead where they will not hurt anyone or anything. I would just like people to keep their dog on a lead and under control”.