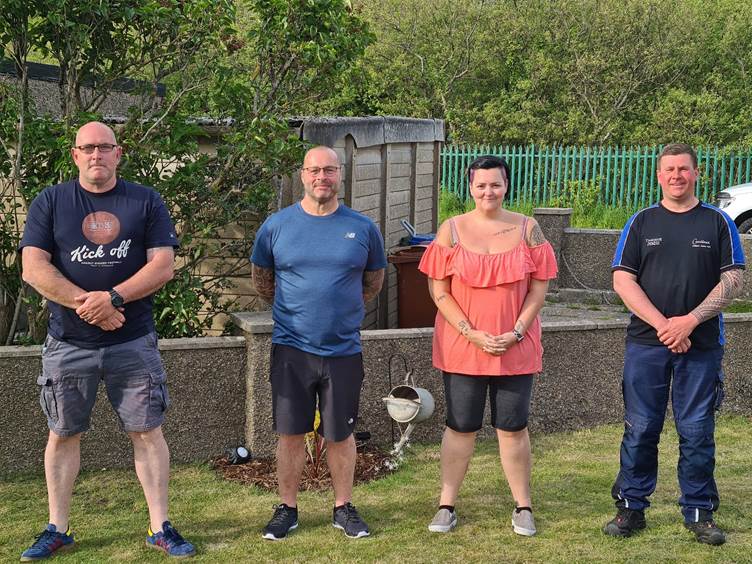 A TEAM of Welsh Ambulance Service volunteers who have saved many lives in their community and assisted during the pandemic have been given an award of the highest calibre.

As part of Volunteers’ Week, the Community First Responders (CFRs) of Barmouth, Gwynedd, have been named as recipients of the Queen’s Award for Voluntary Service (QAVS).

Community First Responders are volunteers who attend 999 calls in their community and administer first aid in the precious first minutes before an ambulance arrives.

They are trained by the Welsh Ambulance Service to administer first aid, including oxygen therapy and cardiopulmonary resuscitation, as well as the use of a defibrillator.

Glyn Jones is a volunteer of 14 years who set up the team with assistance from the ambulance service after observing a team in nearby Harlech.

Glyn, 54, a former harbour master from Barmouth, said: “I don’t even know who put us forward for it.

“The first I heard of it was a few months ago when I received a phone call from the Lord Lieutenant of Gwynedd, Edmund Seymour Bailey, saying that he had been asked to consider us for this award.

“He wanted to know more about us and what we do, so I gave him the duty roster of what we do and some more information.

“He called again a few weeks later enquiring about our roles in the pandemic and again after that with a few more questions.

“I was thinking, ‘Hey up, where are we going with this?’

“And then out of the blue I got an email about six weeks ago telling us that we had got the award.

“To be honest, I didn’t realise fully what it was.

“It was only when I told some colleagues that they said it really was quite some award for the team, the top one.

“It’s been hard to keep a secret.”

Glyn, a father-of-two, has since qualified as an Emergency Medical Technician with the Trust having completed his training at the service’s headquarters in St Asaph.

Still acting as Team Co-ordinator/Manager for the Barmouth CFRs, Glyn spoke of the duties he and his team undertook during the first six months of the pandemic and lockdowns.

“At the start of the pandemic we were stood down from our CFR duties but still wanted to do something for our communities,” he said.

“I noticed long queues outside the pharmacist so approached them and with colleagues, Scott Moncrieff, Libby Catherwood and Damien Williams, arranged a delivery service every day to get prescriptions to those in need and the elderly.

“We’d collect them in the morning, go back to the harbour office, arrange them into geographical areas closest to where we lived and then go out to deliver them.

“Scott, Libby and Damien really held that together and were amazing.

“Whilst we were knocking on doors, if somebody needed a food parcel we would try and help with that, or if someone wasn’t well we’d make sure the ambulance or family knew about it.

Once CFRs were kitted out and trained with their new Personal Protective Equipment (PPE), they were keen to get back out doing what they do best – helping to save the lives of those in need.

“We’ve been back on the road nearly a year now and were itching to sign back on,” said Glyn.

“If I could give one message to the team it is to say how proud of them I am for being who they are and doing what they do.

“They have selflessly thought of others before themselves.

“They are the core.

“They have been there through thick and thin.”

Created in 2002 to mark the anniversary of the Queen’s coronation, the QAVS is the highest award given to local volunteer groups across the UK and the title will stay with the recipients for life.

It is awarded to outstanding groups of volunteers whose level of initiative and impact on their communities is deemed to be exceptional after a rigorous assessment.

In May 2022, two members of the team will attend a special reception at Buckingham Palace to formally receive the award.

Lee Brooks QAM, Director of Operations for the Welsh Ambulance Service, said: “It goes without saying that volunteers play a huge part in Wales’ response to patients.

“The Welsh Ambulance Service is immensely proud of its CFRs and the work they do, particularly as volunteers have taken on new and additional training to respond safely during the pandemic.

“The team in Barmouth richly deserve this recognition for going above and beyond to assist the vulnerable in their rural community, including during the pandemic and also their daily commitment to safeguarding patients’ health.”