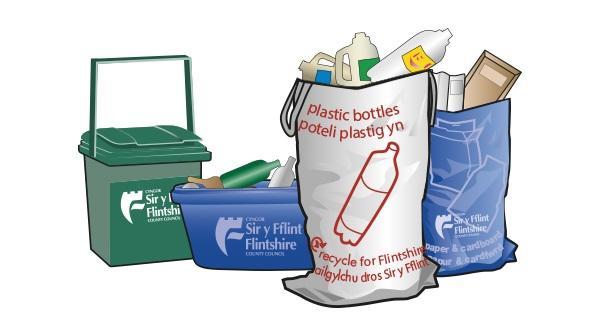 FLINTSHIRE Council’s cabinet has agreed three-weekly black bin collections will be piloted in an area of the county.

The details of the pilot, such as where in the county it will take place and the resources required to run it have yet to be ironed out.
But with the threat of a Welsh Government fine looming over the authority for failing to hit targets – currently 70 per cent recycling – members of the cabinet felt they had little choice but to implement the recommendation which came from Environment scrutiny last week, along with providing more education and communication to residents – to trial three-weekly collection.
At the meeting, Caergwrle Cllr Dave Healey (Lab) queried how the success of the pilot would be measured.

Chief officer for Streetscene Katie Wilby said there would be a logistical challenge with one-round running on a three-weekly cycle, and everywhere else fortnightly, but officers were looking at how that challenge could be managed.
In terms of monitoring the impact of the pilot, she added: “It would be relative. We would have to take a view whether recycling had increased on all of our rounds and has residual waste decreased on all of the rounds.”
Mold East Cllr Chris Bithell (Lab) said he felt the county’s previous high levels of recycling pre-pandemic was encouraging, and that with education and campaigning they could be achieved again.

Lead member for Streetscene, Llanfynydd Cllr Dave Hughes added: “Carrying on the way we were going, we were never going to meet the targets.
“Running a pilot in a small area may actually give us the blueprint for how we achieve that.
“Education is crucial to how we try and get these targets. Better to run a small pilot than do it all in one go. We know the tonnages we’re getting from different rounds so we pick one of those and we see with a concerted effort how much we can lower that target.”
The pilot idea was also supported by leader of the council, Flint Castle Cllr Ian Roberts who confirmed there would be no reduction in council tax as a result.
He said: “You may have seen some of the comments on social media asking ‘are we going to get a reduction if we’re getting a reduction in service’ – well no, because there is a potential reduction in service because recycling isn’t being done.
“It certainly isn’t being done as it was at one point when we were doing particularly well so that possible infraction fine this year will become a considerable sum of money.”

Cllr Roberts said a marker of who is and is not recycling is whether people put their recycling out with their residual waste bins.
Members opted to pilot a three-weekly collection in one area of the county.