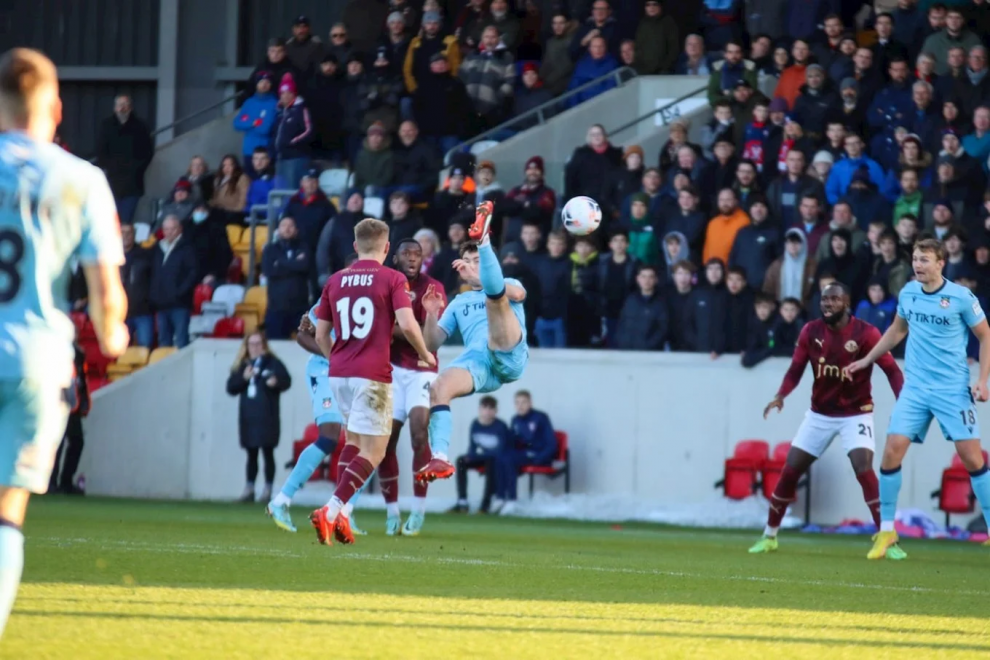 Late drama means the points are shared in Yorkshire

Tom O’Connor’s spectacular overhead kick was not enough to secure a dramatic victory at the LNER Community Stadium as York snatched an equaliser in a game of late drama.

The game looked to be heading for a goalless draw before O’Connor opened the scoring in spectacular style with a minute of normal time remaining.

But Manny Duku levelled just moments later, with his first touch after coming on, as both sides had to share the points in front of the BT Sport cameras.

Phil Parkinson made three changes to Wrexham’s line-up, with Ollie Palmer, Anthony Forde and James Jones all returning to the starting XI.

Sam Dalby and Liam McAlinden dropped to the bench, while Jordan Davies faces up to three months out with the knee injury sustained in the FA Cup win against Farnborough.

Mark Howard was forced into  smart low save inside the first minute, when Adam Crookes flicked a corner goalwards, but Wrexham grew into the game quickly.

Immediately from Howard’s long clearance, Mullin ran onto the long ball and shot from distance straight at Ethan Ross.

Ollie Palmer then muscled his way inside on five minutes, but again his low shot was saved comfortably.

A minute later, Mullin crossed from the right but Elliot Lee could not get a clean connection on his header and on 11 minutes it was Mullin himself wo headed wide from Forde’s brilliant right-wing cross.

James Jones was next to try his luck, working the ball onto his left foot after a well-worked passing move on the quarter-hour, but his low shot lacked power and was cleared away.

At the other end, York had a couple of penalty appeals turned down and Lenell John-Lewis headed wide while tustling with Hayden in one of those instances on 23 minutes.

Though the pace of the game settled, Wrexham had a big opportunity on 32 minutes when Jones picked Gus Mafuta’s pocket, charged forward and was brought down on the edge of the box.

Mafuta was yellow-carded and Forde curled the subsequent free-kick over the bar but Ross clawed the ball away.

Mullin found space on the edge of the area on 37 minutes, but curled his right-footed shot just wide across goal.

Neither side could break the deadlock before the break, however.

Less than a minute after the restart Wrexham had another good free-kick chance, after Callum McFadzean was fouled, but this time Forde curled his effort over.

Mullin’s low shot from distance was then saved on 53 minutes, after Lee had burst forward through the middle.

The second-half lacked rhythm, however, not helped by a handful of injury stoppages as John-Lewis, Aaron Hayden and Alex Whittle all required treatment at various points.

John-Lewis had a great chance to give York the lead on 78 minutes but, unmarked, he headed wide in the area.

Three minutes later, Wrexham substitute Tom O’Connor made a crucial block to deflect Michael Duckworth’s low shot up and over.

Paul Mullin wanted a penalty on 84 minutes, after running onto a long ball and going to ground in the area.

Tom O’Connor finally broke the deadlock on 89 minutes in spectacular style, however. Young’s free-kick was only partially cleared and the Irishman responded with a brilliant overhead kick into the bottom corner.

York’s response was to send on Duku, and the striker levelled proceedings with his first touch, firing high into the net from the right of the area.

There was still time, with seven minutes added on, for Jacob Mendy and Lee to have shots blocked from Young’s corners.

But there were not further goals, as Wrexham were forced to settle for a point – the result meaning the Red Dragons go back to second in the National League.