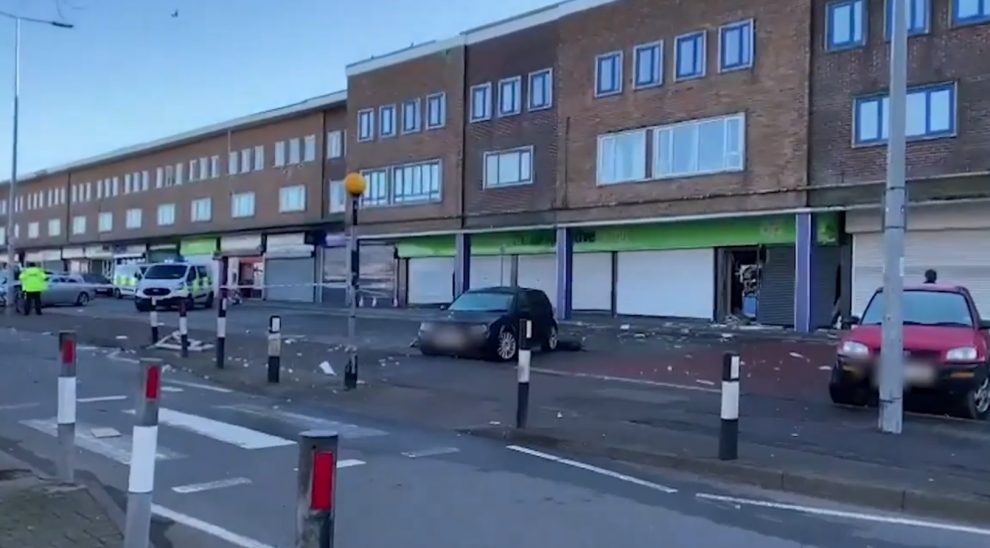 FORTY people were evacuated from their homes after criminals used acetylene cylinders to blast open a shop’s door, and a cash machine in Llanrumney, Cardiff. Police say that the explosion caused significant damage.

The actions of those involved was described as “an absolute disregard for human life” by Cllr Keith Jones.

Those evacuated were taken to a nearby branch of Greggs whilst emergency services dealt with the incident.

Herald.Wales understands that there were no injuries.

A Post on Llanrumney Labour News read as follows: “We have been advised this morning there was a failed attempt to ram raid an ATM at the Co-op at Countisbury Avenue in Llanrumney. The criminals used oxy-acetylene cylinders and when they fled the scene, they set fire to them. The Police and the Fire Service arrived and evacuated eleven families, around 40 people, from the flats above the crime scene.

“The police called the Resilience Unit to provide a haven in the short term. An immediate shelter was found in a local Gregg’s. The Resilience unit activated the Red Cross and Council volunteers, and put Eastern Leisure Centre on standby if necessary. Hotel rooms for longer term shelter [were considered].

“Happily, the cylinders have cooled, and the Fire Service has allowed the families back to their properties and all our responders are being stood down. There will be a structural assessment of the building to ensure it is safe – an initial visual assessment from the Fire Service suggested that it was – and the Resilience Unit will have a hot brief at 9.30 to review all actions by the Local Authority.”

A spokesman for Cardiff Council confirmed it was contacted by the emergency services at 04:00 GMT.

They said: “Following a failed attempt to remove an ATM machine from the Co-op store on Countisbury Avenue, a fire was started at the building, which caused an immediate danger to those living in flats above the shops.

“The council was responsible for the evacuation and shelter of 40 people during this incident, who were firstly moved to a safe distance, and then moved on to a bus until more suitable accommodation could be found.

“All protocols and procedures were followed and the incident ended at 6.30am. The residents have now been moved back into their properties and the council is continuing to support the emergency services while investigations continue.”

Llanrumney Labour said on social media: “In the early hours of 26 February an attempt was made to rob the cash from the cash machine outside of the Co-Op. We have been briefed this morning.

“As you will know as Llanrumney Labour Councillors we successfully secured the installation of new state of the art CCTV cameras for [this] parade of shops that were installed late 2020. We shall be asking that South Wales Police review footage from CCTV cameras 367 & 368.

“They are Pelco Enhanced Spectra IP dome cameras. The cameras are connected back to the Urban Traffic Control Centre based at County Hall. Which is manned 24/7.

“If you know of any details regarding this incident or the identities of those who sought to bring harm to our community then please get in contact.”

Nearby resident Liam Hart, said he heard an explosion around four in the morning.

He said: “We thought a car had crashed into a tree or something like that,” he said. “There’s a lot of joyriders around here and we’ve had it recently.

“This has happened so many times since we’ve lived up here. If they’re not going for the cash machine, they’re going for what’s inside the shop. It’s not fair for the people in the community to have their lives changed because of some ruthless idiots in the community.