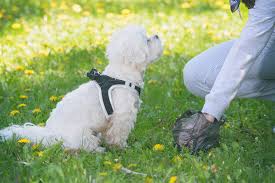 DOG owners in Monmouthshire could soon face new responsibilities – including, for the first time, a county-wide requirement to pick up their dog’s poo.

Plans being worked on by the county council could also see dogs banned from certain areas such as playing fields and parks.

The authority consulted with landowners, including its own estates team, all town and community councils and the Brecon Beacons National Park, during during November and December on what restrictions known as Public Spaces Protection Orders it could, and should, bring forward to control dogs in public places.
Huw Owen, the county’s principal environmental health officer, said he hopes the outcome of the talks will be a first county-wide requirement for dog owners to take responsibility for fouling by their pets.
Mr Owen said: “Quite simply, the rules in Monmouthshire at the moment are ‘you must pick up after your dog if it fouls certain areas in the county’, and that’s it.”
New rules could also mean there would be areas where dogs are required to be kept on leads – or places where there would be an exemption allowing them to run free.

Updating members of the council’s performance scrutiny committee on work on the proposals, Mr Owen said there had been nearly 1,500 responses to a first public consultation which ran from July to October, 2020.
Last November and December the council engaged with “main stakeholders” which also included housing associations and council departments to ask what type of controls they would want to see.
Mr Owen said: “Abergavenny Town Council will be considering Bailey Park. Should that be a dogs on leads area, should there be an exemption area?
“What about dog fouling? I’m certainly hoping that there will be a mandate that if a dog fouls any public area in the county then you must pick up after it.”
He added the authority was awaiting feedback from town and community councils, as well as major landowners, about what measures they would like on their land.

A report is due to go before the council’s place scrutiny committee in early March which will consider potential controls, which could come into force by the end of the year.
Draft Public Spaces Protection Orders would then have to be approved, or amended, by a council committee which would then be subject to a full public consultation.
Mr Owen warned when agreed the final orders will be backed by the full force of the law: “Quite simply the order criminialises whatever is included in that order. I’m hoping, towards the end of this year, we will actually produce a Public Spaces Protection Order with the appropriate controls.”