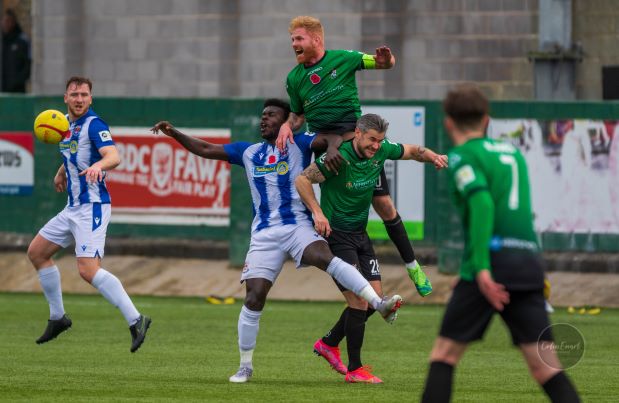 ABERYSTWYTH TOWN maintained their unbeaten home record at home since the resumption of the JD Cymru Premier with a 1-1 draw against top 6 chasing Penybont.

Harry Franklin’s second goal in as many games gave Aber a half time advantage before they were pegged back by Mael Davies’ close range finish with an hour gone.

The Seasiders played the final seconds of the game with ten men as substitute Gwion Owen received a second yellow card deep into stoppage time.

For the second game in a row, Gavin Allen named an unchanged team as he stuck with the eleven charges that defeated Newtown seven days previously.

On a blustery and overcast afternoon, Penybont started the brighter of the two sides. A dangerous cross into the box was headed wide of Connor Roberts’ goal early on. Despite the visitors dominating the ball, the young centre back pairing of Lee Jenkins and Louis Bradford of Aber were equal to their opposition and were successful in limiting Bont’s attacking threat with a Kane Owen shot in the 23rd minute being the only breach of the Black and Green backline early on.

As the half progressed, Aber settled into the contest and took the lead with half an hour on the clock. Skipper Marc Williams flicked the ball over the visiting defence onto midfielder Franklin. The former Evesham man charged into the penalty box and cooly slotted the ball past the onrushing Ashley Morris to give the Seasiders the advantage.

Penybont reacted well to the disappointment and in fact did have the ball in the back of the net but the assistant referee had adjudged attacker Sam Snaith to have been in an offside position. Davies, Owen and Lewis Harling all went close for Rhys Griffiths’ side but Aber’s defence held out comfortably as it had throughout much of the first half.

The second period followed much in the way of the first with Penybont enjoying much of the possession without being able to break down their opponents. Aber were still dangerous on the break and only a post prevented Lee Jenkins from doubling the home side’s lead following a great corner from Matthew Jones.

But just seconds later, the visitors did get the leveller. Opposition manager Rhys Griffiths tinkered with his system and personel and it paid immediate dividends. The ball was worked out to the right flank before Davies cut past two defenders to bury the ball into the back of the net.

With half an hour left to play and needing a win to confirm their position in top 6 for the first time, Penybont sensed a winner and dominated possession. Roberts was forced into a save from a Harling shot as they looked to turn their dominance into goals.

But Aber defended resolutely and weathered the visiting storm well. In fact, they came the closest during the middle third of the half to taking the lead. Jones and Jenkins combined brilliantly again from a set piece and only an acrobatic tip over from Morris kept the score at 1-1. From the resulting corner, two chances fell to Aber, first to sub Jon Owen who’s effort was stopped by Morris’ feet then to Jack Thorn who’s follow up was narrowly wide.

With the game hurtling towards an exciting conclusion, both keepers pulled off spectacular saves to keep the parity. Roberts somehow managed to claw out Mason Jones-Thomas’ goal bound effort while Aber sub Jonny Evans forced Morris into a brilliant save to prevent his lob giving Aber all three points with just two minutes to play.

There was still time for a nervy finish as Gwion Owen was given a second yellow card for stopping a dangerous looking counter attack but the Black and Green’s defence were able to marshal the danger expertly.

Guests at an illegal wedding reception have been fined