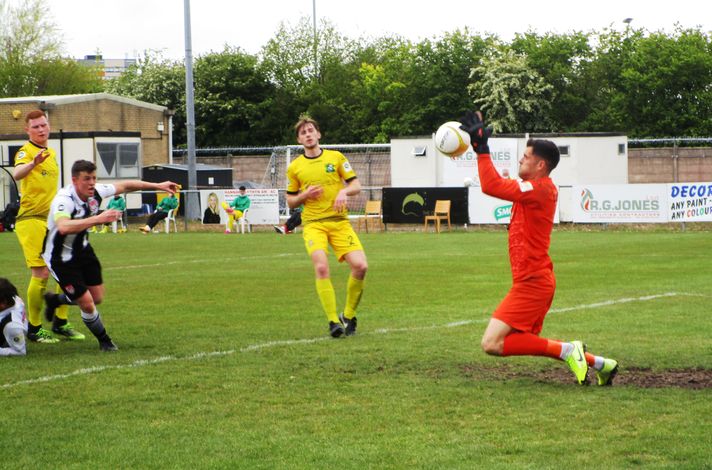 ABERYSTWYTH Town and Flint Town United played out a goalless draw on Saturday (May 8).

It could have been much different for Aber, though, as they played against a Flint side who had Ben Amiss sent off in the first half, but they failed to make their advantage count.

With Wales experiencing some unseasonal weather, the Deeside coast was battered by mother-nature in the build-up to the game and full credit must go to the volunteers at the Silkmen for producing an excellent playing surface.

Aber started the game brightly and carved out two great openings in the first five minutes.  Firstly, Louis Bradford volleyed over the bar from close range before some brilliant work down the left from Harry Franklin teed up a cross for Jonathan Evans who’s goal bound header looked to have given the Seasiders the initiative.

However, home stopper Jon Rushton had other ideas, pulling off a sumptuous save down low, pawing the ball away to safety.

After the two quick chances for Aber, Flint settled into the contest and began creating chances of their own.

The home side saw strikes from Alex Jones and Callum Brately fall narrowly wide of the post before creating their best opportunity of the half with 23 minutes having elapsed.

Great play down the right flank saw the ball land to Ross Weaver. His strike, via a deflection from Black and Green defender Ian Kearney forced Connor Roberts into a great stop.

Franklin was causing problems for the Silkmen and Aber’s most likely route towards victory looked to be coming down his wing. He had a glorious opportunity to give Aber the lead but couldn’t keep his effort under the crossbar. He did have the ball in the back of the net but an early flag from the linesman denied him his fourth of the season.

The game’s flashpoint came with just seconds to go until the break. A heavy tackle in midfield from Ben Amiss on Jamie Veale, sparking a 19-man melee in midfield and saw referee Bryn Markham Jones reach for his red card for the Flint Town United striker.

With Aber having a numerical advantage, they enjoyed more of the ball in the second stanza but could only create sporadic chances against a well drilled and organised back line. Mathew Jones saw a strike fall narrowly over the bar whilst Kearney’s header from a corner landed on the roof of the home net.

To their credit, Flint did look to gain a winner of their own and had spells of pressure but like their opponents, they couldn’t break down an organised Seasiders’ defence. The lively Jones for the hosts came closest with his header going wide of the far post.

Gavin Allen introduced Owain Jones and Marc Williams as well as Jamie Reed late on in search of the go ahead goal but despite the addition of additional fire power, there was to be no late drama.

Jon Owen saw a shot well stopped by Rushton whilst Jenkins tried to connect with a Jack Rimmer cross in the final minute but could only make connection with the home keeper, earning himself a yellow card in the process.

Graffiti damages area of scientific and historical interest in Pembrokeshire

Nomads leave it late to see off Bala