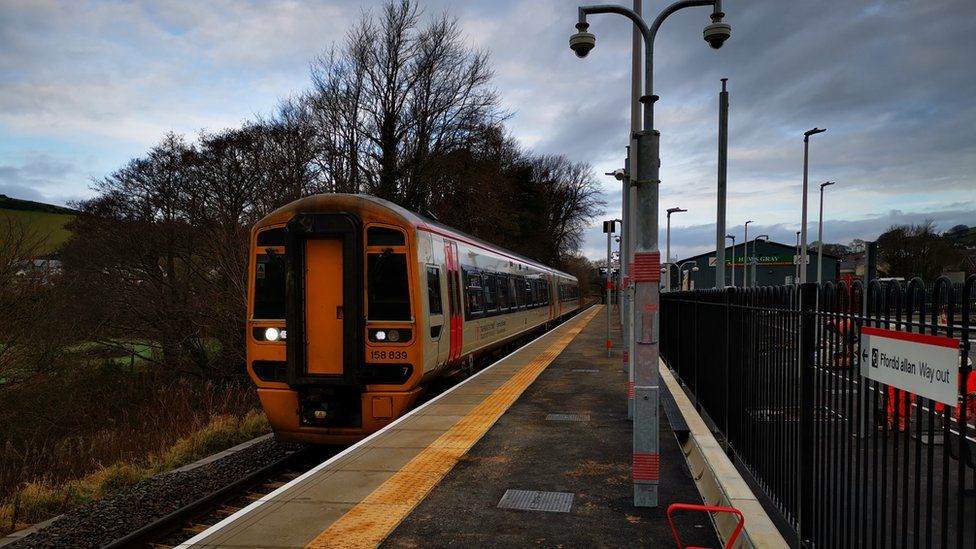 A SMALL village near Aberystwyth has seen the first train arrive at it’s platform since 1965.
Bow Street station, which is a namesake to the famous station in Covent Garden, London, has finally had its rail service reinstated after 56 years.
The opening was kept private to stop train enthusiasts from being tempted to break lockdown restrictions.
The 09.12 GMT fanfare from Machynlleth to Aberystwyth stopped at the small Ceredigion village on Sunday (Feb 14) for the first time since 1965.
The original Bow Street station, which closed in the 60’s after 100 years in service, is now the site of a builders merchants.
The project to reinstate the train service at Bow Street has been 11 years in the making.
Bow Street now features a 110 yard platform and is just south of the former site.
With the busy seaside and university town of Aberystwyth situated just four miles from the station, the hope is to make the station a local travel hwb, with its bike shelter and 70 space car parking facility.
John Glasby, Aberystwyth Business Club chairman said: “Especially at rush hour and peak tourism season traffic is a problem.
“Especially in a tight, cramped town with only two ways in and out – so hopefully a new park-and-ride station on the edge of town might alleviate that pressure on infrastructure and boost local trade.
“The estimate is if you invest £8m on local public transport infrastructure, the local economic benefit is three times that – so in this case £24m.”
Transport for Wales chief executive, James Price said: “This is an important milestone for us and we’d have liked to celebrate it more but that’s not appropriate and safe at the moment.”
The stop, which is situated on the Cambrian line which connects Aberystwyth and Pwllheli to Birmingham and Shrewsbury, is said to have cost around £8 million.
Mr Price added: “The benefit for the amount of money invested here was higher that anywhere else.”