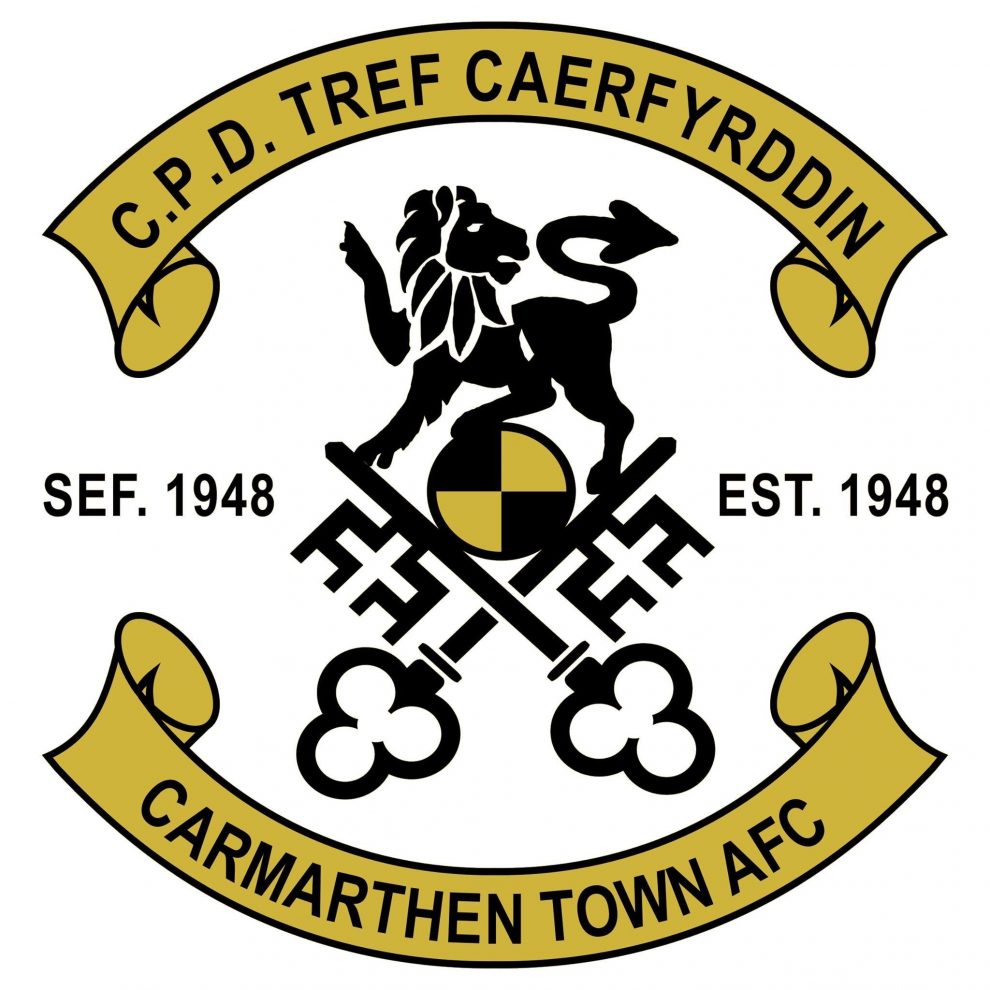 Carmarthen’s loyal travelling supporters, having endured a distinctly dismal opening 35 minutes during which time Celtic secured a thoroughly deserved two-goal lead, then went on to witness a quite remarkable turn-around from Town with a stunning second-half performance which overwhelmed the hosts.

However the Old Gold managed the first notable scoring attempt when on 4 minutes Tom Dyson moved forward from the centre-circle and from 30 yards released a speculative drive that the home goal-keeper Winstone turned over the bar.

Yet from that moment onwards Cwmbran were testing Town’s defence regularly. Notably, on 13 minutes Lewis Iles broke clear of defenders to pursue a long pass but, while his lobbed shot from the edge of the penalty area defeated ‘keeper Ifan Knott as he advanced out of his goal, the ball flew over the bar.

However shortly afterwards Celtic were ahead. A deep cross was sent into the penalty area and while Knott and striker Alex Bonthron challenged for the ball, the referee deemed that the young ‘keeper had done so dangerously – moments later the striker comfortably converted the inevitable penalty-kick.

And worse was soon to follow for Carmarthen. On 25 minutes a fine pass was sent across from the touchline to the wide edge of the penalty area to reach Sam Powell who instantly dispatched a fierce drive that flew beyond Knott’s reach and into the back of the net.

During this phase of the match the Old Gold simply had no answer to Celtic’s rapid movement and crisp passing.

Yet gradually, as half-time was approaching, Town became much more competitive and this soon led to them to score a valuable goal. In the 43rd minute a slick move along the left flank led to the ball being sent to Liam Thomas deep inside the penalty area and, with his typical composure, he converted the scoring opportunity.

After the interval Carmarthen continued to dominate the play. On 47 minutes Greg Walters, in a crowded penalty area, struck a crisp drive that ‘keeper Winstone, at full-stretch, turned around the post.

Then, just moments later, Town were awarded a long-range free-kick which, from fully 35 yards, Walters dispatched to leave Winstone floundering and the back of the net bulging.

Soon afterwards the Old Gold were back again looking for yet more success and they did not have long to wait – on 54 minutes Dyson sent a fine cross into a crowded penalty area where Thomas, always alert to a scoring opportunity, typically reached the ball quickest and stabbed it into the net.

And barely had the ball been taken out of the net and been put back into play it was returned to the familiar surroundings of the Cwmbran goal deposited there in the 56th minute by Mathew Delaney after he had launched an impressive long shot that goal-keeper Winstone badly misjudged.

Yet Town were still not satisfied with the score-line. On 64 minutes Jordan Vickers, on the right-wing, sent a cross into a crowded penalty area where Walters claimed the ball and promptly struck a stunning angled drive into the far corner of the goal.

However finally, Celtic who had never stopped competing, managed a token last-minute goal when deep into added time Bonthron raced clear into the Town penalty area and fired the ball past Knott and into the corner of the net.

Ultimately this was a very satisfactory match for Town’s travelling supporters to have witnessed – however, if the lingering recollections of the miserable first-half performance could be erased it would be so very much better.

Carmarthen’s next fixture is at Richmond Park against Pontadawe Town on Saturday, October 29, k/o 2.30pm.