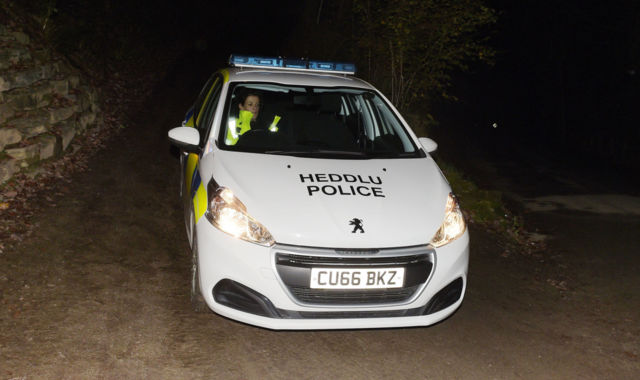 A police car cordons off a road in Llangammarch Wells, Powys, after several members of a family are feared dead after a blaze ripped through a farmhouse in rural Wales. PRESS ASSOCIATION Photo. Picture date: Monday October 30, 2017. Three children, aged 13, 12, and 10, managed to escape unharmed but police say "a number of people" are missing after the blaze with both adults and children feared to have been killed. See PA story FIRE Powys. Photo credit should read: Ben Birchall/PA Wire

SIX dogs that were taken during a suspected burglary in Carmarthen have been returned to their owner within two days of the incident being reported.
Dyfed-Powys Police officers were able to reunite the pets with their elderly owner thanks to swift and tenacious work by a number of departments.
The force received a report of a burglary on Wednesday, February 3, during which four King Charles cavaliers, a bichon fries and a golden cocker spaniel were taken, leaving the 77-year-old owner distraught.
Officer in case PC Sophie Adams immediately began carrying out enquiries to locate the dogs, with support from Carmarthen response officers, colleagues from the Pembrokeshire division, and roads policing officers.
Sergeant Darren Morgan said: “One of the dogs was found nearby, and PC Adams conducted all possible lines of enquiry to find the other five as quickly as possible.
“Using information supplied by the owner, she was able to identify a vehicle which was brought to a stop by Pembrokeshire Roads Policing Unit in the Haverfordwest area on Thursday morning.”
Two warrants were carried out during the afternoon of Thursday, February 4, with the remaining five dogs recovered.
The dogs were scanned for microchips, and were confirmed to be those suspected of being stolen the previous day.
Sgt Darren said: “PC Adams updated the owner of the dogs, who was understandably delighted. Thanks to her determination and enthusiasm, PC Adams ensured the injured party had his dogs returned safely.
“The support and assistance in the investigation by a number of departments was greatly appreciated, and contributed to the positive outcome for the owner.”
A 17-year-old has been arrested on suspicion of burglary, and has been released under investigation pending forensic investigations and digital enquiries.

Glangwili under pressure with significant number of COVID-19 patients

Swansea teenager, who took up art during lockdown, sells work for thousands