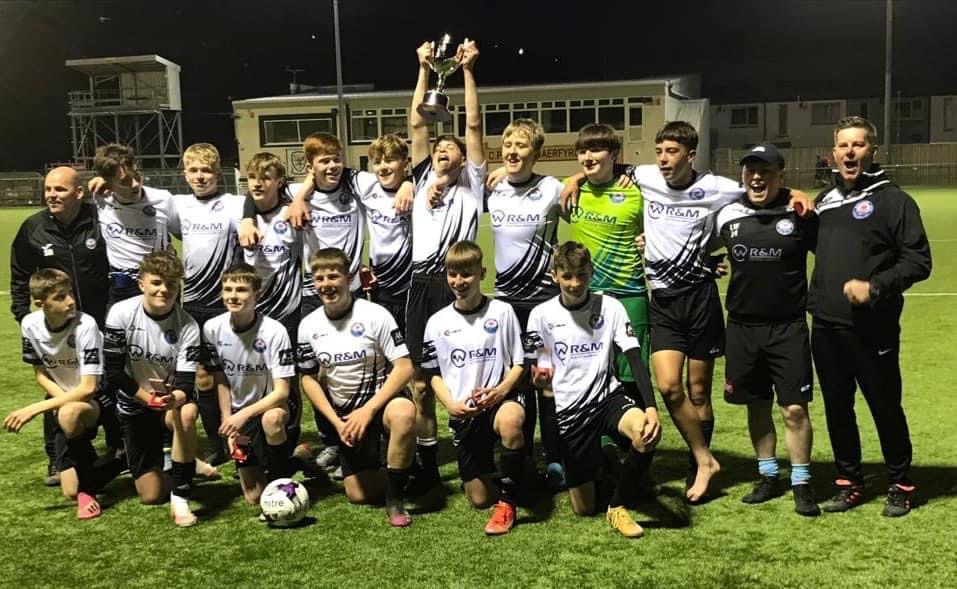 Report and picture by Tony Organ

NEYLAND Under 15s are West Wales champions – just like the Under 14s – after beating Sandfields Juniors 1-0 in Carmarthen.

It was a close affair against the Port Talbot side in what was an engrossing West Wales Cup final under floodlights at Richmond Park.

There was nothing between the two sides after 90 minutes and it took until the second period of extra-time for LEO POWER to score the winner amid scenes of utter jubilation.

The Under 14s also won their West Wales Cup final 1-0 and it shows the determination and fighting spirit and never-say-die attitude of Neyland’s youngsters.

Tuesday’s win makes it four cup successes for the Under 15s and Under 14s this season – two in the Pembs Cup in their respective age groups and two in West Wales competitions. Plus the Under 14s won their league while the Under 15s finished runners-up.

Neyland slightly edged the first half and tested the Sandfield keeper three times. The first occasion came via Ben Gale (8 minutes) and then Pirates keeper Lennon Howlett was called upon to make what was a comfortable save (11).

A Mason Morgan-Hurley corner struck the post (20) before midfield general Ashley Watkins produced a decent effort (30) and the score was level at the interval.

It was nip-and-tuck in the second half and we had a number of chances to win the game, especially with the last kick of normal time via an effort from Ben Gale. But it ended goalless and the final went into extra-time (10 minutes each way).

This was a nervous affair before Leo Power struck to take the cup home to Neyland.

Thanks once again to the sponsors of the team coach: R&M Electrical, O C Davies & Son Roundabout Garage Neyland and the Inker Family.