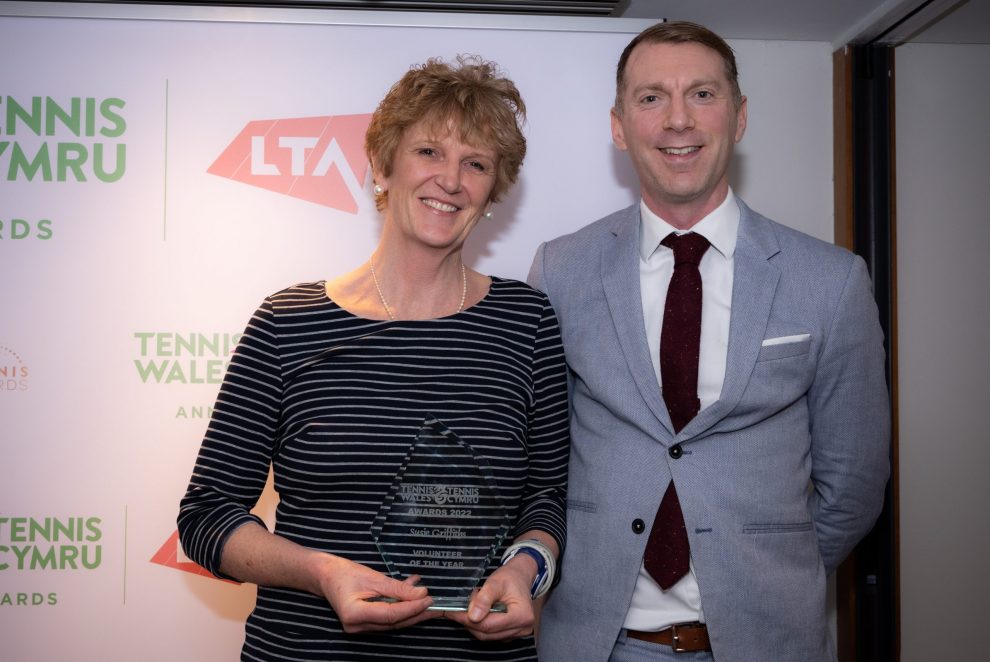 THE President’s Award and School of the Year are just two of the awards given to players and clubs across North Wales at this year’s Tennis Wales Awards 2022 – with local players and clubs scooping four of the coveted sports Awards.

Former Emma Raducanu coach Mathew James, Volunteer Susie Griffiths, Myddelton College, and Development Coach John Whitehall are among those recognised at the 2022 Tennis Wales awards following their dedication and commitment to tennis during the last year.

Nominated by members of the tennis community, these individuals have been recognised for their unwavering talents within the sport they love.

With each displaying their own notable qualities, the awards ceremony – hosted on March 5 – celebrated their achievements in St David’s Hotel, Cardiff.

Coach to the stars Matthew James has been awarded the prestigious Tennis Wales President’s Award – personally selected by Tennis Wales President, Amanda Sater – for his commitment to representing North Wales whilst working within the international tennis circuit and competing at county cup competitions each year. Following coaching Emma Raducanu for two years, Matthew was selected as a member of Team GB’s coaching team for the Tokyo Olympics.

His nominator said: “Mathew has been doing some great work with players for a number of years now, but it is this year that some of his work has been rewarded on the world stage due to the breakthrough of Emma Raducanu.

“He was also part of the tennis coaching team for Team GB at the Tokyo Olympics and fulfils a vital role at the NTC coaching and training some of GB’s very best players.”

Having worked with the likes of the Murrays, Raducanu and more, Matthew James’ CV made him a shoe-in for the prestigious award.

Amanda Sater, Tennis Wales President, said: “Matthew truly deserves this award. He has shown unwavering dedication to not only supporting and representing tennis here in Wales, but also inspiring and educating the latest generation of tennis stars across the UK.

Whilst he certainly has impressive credentials, we know that such energy and commitment travels beyond the tennis court in a way that’s simply inspiring. Congratulations Matthew.”

Similarly noted for their dedication to tennis is Susie Griffiths, winner of the Volunteer of the Year award.

Her nominator noted: “Suzie has been instrumental in increasing participation at Bangor Tennis Club and setting up Rhosneigr Tennis Club. We’re all so proud of Suzie!”

Through Suzie’s research, fundraising, community outreach and coaching support, both Bangor and Rhosneigr Tennis Club have seen an impressive increase in membership, funding, coaching programmes, and overall interest in tennis throughout the community – with membership increasing at Bangor Tennis Club from 80 to over 200 members.

Whilst working in collaboration with Suzie to help set up the coaching programme at Rhosneigr Tennis Club, John Whitehall was also awarded for his efforts at this year’s Tennis Wales Awards, taking home the Dragon Signs: Development Coach of the Year prize.

John’s drive to grow tennis and coaching across Wales has been unparalleled: through successfully introducing coaching programmes at five new venues this year alone, his impact has been reflected in an increase in members at clubs across North Wales, including over 500 new participants in the coaching programme at this years five clubs alone.

One of the schools where John’s impact can be seen is Myddleton Collage – winner of this year’s School of the Year award. During 2021, the College has demonstrated a real passion in integrating tennis as a key sport throughout the school.

Noted by their nominator: “All the pupils have actively engaged in Tennis for a minimum of 10 weeks as well as having a high menu of additional Tennis activities they can participate in including afterschool clubs, competitions, coaching options and free play.”

Following an additional £40,000 in funding facility improvement to develop more playing options for the students, Myddleton College have also linked with Denbigh Tennis Club and the wider tennis network to make the school’s future tennis programme even more accessible and inviting.

Simon Johnson, CEO of Tennis Wales said: “Our North Wales tennis community is truly going from strength to strength and we’re proud to have so many dedicated and talented people and clubs available for all members of the community.

It’s with special thanks that we recognise Susie, John, Matthew and Myddleton College for all of their hard work during the trials and tribulations of 2021 to open up tennis and encourage it’s growth.”

For more information about the Tennis Wales Awards, and to find a club or coach near you, visit lta.org.uk/about-us/in-your-area/tennis-wales/