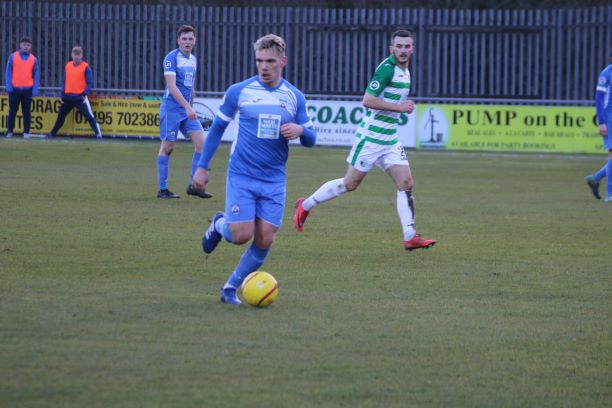 HAVERFORDWEST COUNTY moved back into the top six of the JD Cymru Premier as they beat TNS 2-1 at the Bridge Meadow on Saturday evening.

Saturday’s other results had seen the Bluebirds slip back to seventh but their win keeps them firmly in the hunt for a top six finish at the end of the first phase.

Matthew Turner was in goal for the Bluebirds while new signing Jazz Richards made his full debut.

There was an early chance for the visitors as the bull was cut back to Leo Smith but his shot was well blocked by Ricky Watts.

With twelve minutes gone the home side had their first chance of the match as Ben Fawcett passed the ball back to Corey Shephard who let fly from 25 yards but Saints keeper Paul Harrison made a good save to tip the ball onto the post and wide.

Four minutes later though, a cross into the box wasn’t cleared by TNS and the ball came to Shephard on the edge of the box who drilled the ball low into the bottom left corner to give the Bluebirds the lead.

TNS protested but the goal stood and they were up in arms moments after as Leo Smith went down in the box but the referee waved away appeals for a penalty.

Kieran Lewis then played the ball through for Ben Fawcett but he shot straight at keeper Harrison.

Ten minutes before the break, Haverfordwest broke from a TNS corner and it was Ricky Watts who crossed to the back post for Danny Williams but his volley back across the face of goal went just wide.

In injury time, Chris Marriot crossed into the box for Louis Robles but his header, which appeared to be heading for the top corner, brought an excellent save from Bluebirds keeper Matthew Turner who punched the ball away.

The half time whistle went soon after and although the Bluebirds held a 1-0 lead, they knew their opponents were going to throw everything at them to get back into the game.

And five minutes into the second half the visitors were level. A corner from the left was headed in by Blaine Hudson with the ball going in off the under side of the bar.

Daniel Redmond then had a run towards goal but he was stopped by a brilliant tackle from Alaric Jones.

On the hour mark the visitors had a free kick on the edge of the box which was floated in by Redmond but Turner was able to punch the ball away.

With just over twenty minutes to go, the ball fell kindly for TNS sub Dean Ebbe but his effort was tame and keeper Turner made a comfortable save.

Moments later, Shephard and Fawcett combined to set Danny Williams free and he laid the ball off for sub Cameron Keetch on the overlap who shot across goal and into the far right corner of the net.

It was an excellent goal for the Bluebirds who had weathered the visitors’ spell of pressure.

TNS were down but not out however, and with six minutes to go they very nearly equalised again.

Tom Holland crossed into the box and Ebbe headed the ball down but Ricky Watts was in the right place to poke the ball out before Robles could tap in.

From the resulting corner, Ryan Astles headed towards goal but Matthew Turner made another excellent flying save to deny him.

Four minutes of stoppage time were added on but they passed without incident as the Bluebirds held on for the win.

The three points sees the Bluebirds move into sixth spot in the table, two points behind fifth placed Penybont who have played a game less.

TNS remain second in the table but they now sit three points behind the league leaders Connah’s Quay Nomads.

On Tuesday, March 16, TNS will look to get back to winning ways when they take on Cefn Druids, kick off at 7:45pm.

Haverfordwest are next in action on Saturday, March 20, when they visit Connah’s Quay Nomads.