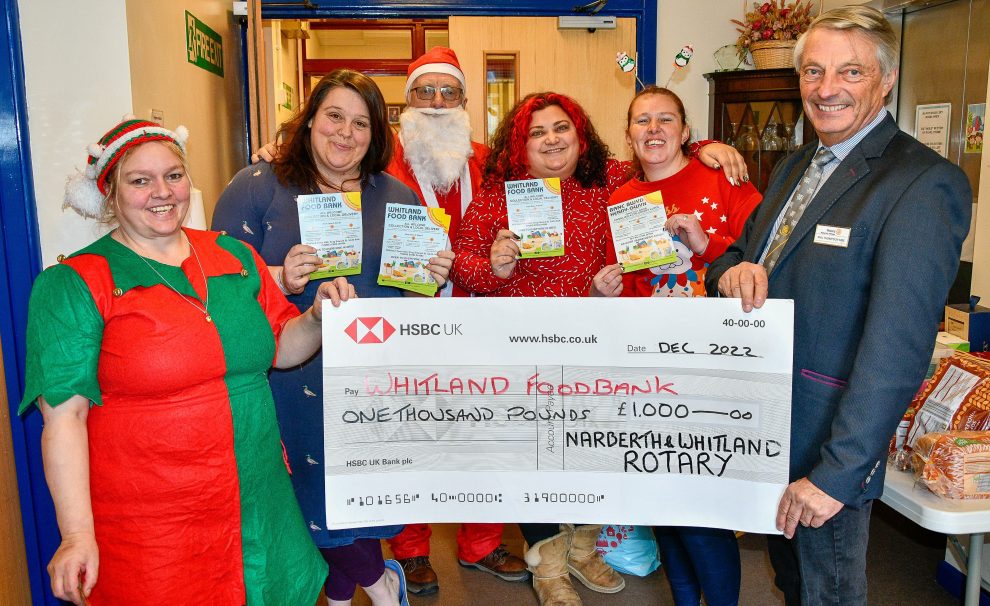 NARBERTH and Whitland Rotary Club has donated £1000 to Whitland Foodbank ahead of Christmas.

Most of this money was raised at the 3K Santa Fun Run held in the town recently. After expenses the amount raised was £750.

The event was supported by generous donors Davies Builders Merchants, Castell Howell, Patrick Jones and Revelation Signs plus local shops the Co-op, Gus the Newsagent and Tammy at the Bakers House in Whitland.

Narberth & Whitland Rotary President Phil Thompson and his executive committee decided to top that amount up to £1000 to make a real difference in the Whitland and St Clears Communities.

Foodbank Manager Helen Ryan told President Phil with members Nigel and Mary that they will have sent out 460 parcels by the end of the week leading up to Christmas. A tremendous effort from volunteers.

“Families are struggling and we are reaching out to help more people as possible”, She says and “it’s very emotional to hear the hardship that some people are suffering. The choices they are making are between heating and eating. This money will make a huge difference to our Food Bank.”.

If you know anyone who needs help please contact the Whitland Foodbank at Whitland Town Hall, King Edward Street Whitland SA340AA and telephone 01994 241694. They are open every Tuesday but if you require emergency help can be contacted on the above number.

The service also is available to people who have no access to transport, local deliveries are on Friday afternoons.

Foodbank Manager Helen is extremely grateful to organisations such as Rotary to help them make a real difference in the Community. She was also extremely grateful to everyone who turned out to support the first Whitland Town Centre Santa Run on a very treacherous icy morning starting and finishing at the Whitland Bowling Club.

Narberth and Whitland Rotary members are hoping  the event will be biannual alternating with Narberth Town.

Organiser Ken Morgan commented that the Whitland Air Cadets led by Squadron Leader Kris Butler and Sergeant May helped in the morning setting up the tables outside the bowling club and then clearing away at the end of the run. They also helped to Marshall the runners at strategic points around the town and then presented the commemorative medals to all participants when  they finished the 3Km run.

Narberth & Whitland Round Table also joined in the excitement for youngsters by providing the Santa Sleigh from which Santa gave the children sweets whilst the adults enjoyed a glass of mulled wine and a warm mince pie. The Cadets were also treated to a warm lunch kindly donated by the Whitland Bowling Club courtesy of the Chair Cally Jones.

JD Cymru Premier: One more round of fixtures before Christmas
Entertaining scenes at Boulevard Theatre this week as Jack and the Beanstalk shows are well underway