Home > Comment > Badger and sorting out the rubbish
Badger 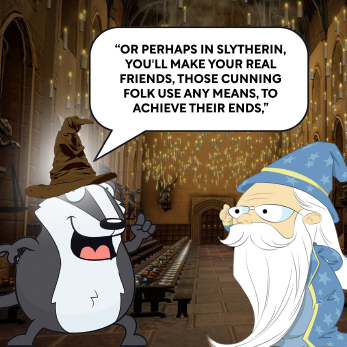 WELCOME, readers.
Badger has waited until the dust settled following the local government elections before offering his take on the new Council.

First is the news that David Simpson returns as the leader.

Faced with the prospect of losing out – again – the IPG, the largest opposition group, declined to put forward a sacrificial lamb.

Second, Badger offers a sincere round of applause to those new councillors elected as independents who’ve stayed true to their promises to voters.

It takes a considerable presence of mind not to flock to the shelter of a group, especially when there are committee seats and other sweeties on offer.

To those who said they were independent and remained so congratulations.
If you’re in a political group, you’re not independent.

Others who stood as “Independents”, Simon Wright, Shon Rees, Iwan Ward, Huw Murphy, and Delme Harries, were not independent.

They’ve joined the oxymoronically named Independent Political Group.
Before the election, Badger could’ve pencilled those names in as probable IPG members. It remains the case that only one candidate, Rob Summons, has ever been elected using the IPG name – and that was in a by-election.

It makes you wonder what faith you can put in someone who describes themselves as one thing and then submits to a group whip.

It’s almost as though they lack the courage of the convictions they do not have.
Picture each election as the Council’s equivalent of bringing Hogwarts’ first-year pupils forward to allocate them to their houses
Hufflepuff, Slytherin, Gryffindor, and Ravenclaw are the choices.

At the front stands the nervous councillor waiting for the sorting hat to decide their fate.
Knees a-shaking, Mike Stoddart mutters “not Slytherin” every five years before the hat dispenses him to his rightful place.

Every five years, the IPG gets those most suited to Slytherin.

On its face, Jamie Adams is about as likely a Draco Malfoy as Paul Miller is a Ron Weasley, but Badger never claimed it was a perfect metaphor.

The one thing you can say about the IPG’s current incarnation is that it lacks a Dolores Umbridge.

There are, dear readers, thirteen women councillors on Pembrokeshire County Council. Not one of them sits with the IPG.

The IPG is very pale and very male. Badger declines to say “very stale; although a certain cheesy aroma emanates from its dairy farming members.

Straight Outta Camrose, the IPG is the NWA – No Women Allowed.
To rectify the gender gap, IPG members will take turns wearing a tube top and mini skirt combo to show willing.

The variation in the group’s perspective is perhaps best demonstrated that many of its members drive tractors, but only one – Brian Hall – could fix one.

The IPG has Jamie Adams’ considerable talents at its disposal. Badger rates Jamie Adams as a political operator who has wit and intelligence. He’s lousy at delegation, however, and prone to complacency.

A little “independent” thought is needed for the IPG to show it has a constructive and meaningful alternative programme for Pembrokeshire instead of opposition for its own sake and crocodile tears about Council Tax.

Unless you have an alternative, queuing up to complain once a year isn’t a policy.
The IPG has never presented an alternative, costed budget despite councillors getting more information about the local authority’s finances.

The demise of Plaid Cymru across North Pembrokeshire shows that the IPG has its finger on the real issues affecting Pembrokeshire’s rural areas.

Agriculture is a vital local industry that supports more jobs in Pembrokeshire than any other bar tourism.

It’s a fundamental weakness that our County’s rural economy and future are not higher priorities than virtue-signalling identity politics.

Sure, it’s nice to be nice, but there are current needs a new administration must address no matter how disagreeable some members find people who don’t share their “enlightened” worldview.

The big issues are housing, social care, education, and the economy.

With those, roads, bins, and tackling Pembrokeshire’s continuous festival of litter are enough for a programme for administration.

Simultaneously, the Council needs to do unsexy things like balancing the books, streamlining its administration, interacting with community groups, and making sure leisure and cultural facilities meet the mark.

Tackling the big four issues is a function of the central government. Wales’s record on each of them is dire.

Pembrokeshire shows signs of bucking the national trend by providing homes for local people and regenerating its town centres through the intelligent investment of external funds designated for that purpose.

However, social care and education are issues of such magnitude that mostly the Council is chained to the Welsh Government’s ever-shifting strategies, programmes, working groups, and plans.

Pembrokeshire’s roads, it may shock the casual reader, are among Wales’s better ones.
Chew on that, readers, and then drive through Carmarthenshire and Ceredigion and experience a demolition derby’s impacts on your vehicle’s suspension.

Litter and bins are bread and butter issues. However, managing people’s expectations of them also involves persuading them not to dump their rubbish wherever they feel like it and doing the relatively minor task of sorting out their kerb-side trash.

To them, Badger makes a gentle suggestion: assuming you wipe your bottoms in the privacy of a WC after going to the loo, don’t drop your crap in hedgerows or on pavements because nobody is watching.

If there are problems, especially with litter following antisocial behaviour, report it to your town council or county council, or better, email your councillors and keep a copy.

Don’t expect councillors to hang on your every whinge on Facebook, where it’s hard to separate the meaningful complaint from the idiotic.

Your councillors rely on you to tell them what your problems are.

Speak to them and not at them, and you might get somewhere. If not, there’s always the next election not to bother voting in.

Jonathan Edwards: The House of Lords Must Go

The Boris Johnson show must go on, but for how long?

Badger and the Ladder of Opportunity

Badger and the fury of shame