Home > Comment > Badger and the value of silence
Badger 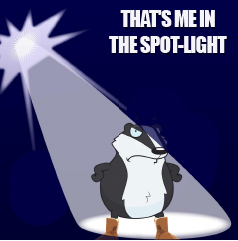 BADGER believes – sincerely and deeply – that the overwhelming majority of people who enter politics do so with the best intentions.

They possess faith in their capacity to help others and solve problems that matter to people.
At least, Badger contends, that’s the case at the local government level.
From community and town councils to county councils, most elected members intend to do their best within their abilities.

By and large, they succeed.
For very few, things start to go wrong once they’re elected.
They become addicted to being the centre of attention and do all they can to put themselves in the spotlight.

The best councillors plough on and only call for attention when they spot a problem affecting their communities.

During the last Council term, many councillors grafted their way along to bring their communities together and help them through the pandemic.

Some worked harder than others, and some desperately tried to hog the limelight.
That’s a fact of life in every sphere of work.

Among those inclined to seek attention was Paul Dowson, the former county councillor for Pembroke Dock Central.

This week, the former councillor picked up a three-year ban from the Independent Adjudication Panel for Wales following a well-publicised and lamentable series of online posts and even less well-judged online responses to those who felt wronged and were wronged by his words.

However, when Paul Dowson got things right, he got them spot-on.
Fly-tipping in Pembroke Dock, Rachman-esque landlords making a bomb from Housing Benefit, the state of abandoned properties blighting the town, and – perhaps – most importantly, the vigorous and determined campaign against the construction of a lorry park near Pembroke Dock’s Asda petrol station.

On all of those, Paul Dowson was vocal and on the right side of the argument.
Some councillors spent their time burnishing their images and profiles and spat out their dummies when they could not get their way. Former councillor Dowson tried to make a difference and then spat the dummy on other issues that had little or nothing to do with being a councillor.

Sadly, his affiliation with a bunch of arm-lifting loons and subsequent social media outbursts obscure the positive things he did.
The evil that men do and all that jazz.

This week, the above occurred to Badger when he read a singularly ill-informed tirade launched on a local Facebook group.

Badger will recount the facts.
The Covid pandemic played holy hell with many of the Council’s statutory functions, especially planning.

For the very hard of thinking, the Council must decide on planning applications within a prescribed period.

It also depends on other statutory consultees (like Welsh Water, Natural Resources Wales, and the Coal Authority) responding in good time.

The Council’s Planning Committee was frustrated in resolving the planning application relating to a proposed lorry park off Western Way because one of the statutory consultees took far too long to provide a considered response.

On top of Covid restrictions affecting their considerations, the complexity of the application spun out proceedings for longer than permitted under the planning rules.
The developer, as is their right, notified the Council it would judicially review the planning process for not finishing in time.

The Council will not fight the judicial review because it has no legal grounds for objection.
The civil rules are like the criminal law relating to drink driving; strict liability applies.
In its infinite wisdom, the Welsh Government made no adaptations to planning rules during the pandemic’s course.

Pembroke Dock’s county councillors and town council objected to the application at every stage.

Tony Wilcox, Brian Hall, and Paul Dowson spoke vehemently against the scheme at every meeting they attended.

Only one of Pembroke Dock’s then-four county councillors said bog-all at any planning committee meeting.

Notwithstanding the absence of such a valuable voice, the Planning Committee rejected the application unanimously at its March meeting.

The planning decision stands until set aside on application to the Welsh Government.
If you read the fulminations on Facebook, you’d imagine this was a great betrayal by the Council and those damned councillors who are all only in it for the money.

Look at it this way; the remarks were so wide of the mark they caused Badger to reflect on how Paul Dowson achieved some positive things during his tenure.

Some of those who most persistently commented should bear that in mind.
Those commenting never bothered to watch the planning meetings or read the papers accompanying them.

There was “something fishy” because those involved couldn’t be arsed to consider the available evidence.

Better their prejudices and preconceptions than anything as tedious as finding the truth for themselves.

As a pathetic display of self-indulgent whining, it deserves one of those minor BAFTAs nobody gives a toss about: best cinematography of an empty fridge, for example.
For goodness’ sake!

If you want your opinions taken seriously, do the basics: read, watch, inwardly digest, set aside your prejudices, and then reach a considered and dispassionate judgement based on what you see, hear, and read.

That’s not a terrifically high bar to jump over.
If all you do is offer reactions based on your preconceptions, your opinions are next to worthless. They are self-indulgent and self-aggrandising shots from the lip; unthinking thought, if you will.

But human beings – even councillors or aspiring councillors – can do something to avoid looking like plonkers.

If you aspire to be an authority on anything, an attempt at self-education before commenting is essential.

After all, it is better to be thought a fool and say nothing than open your mouth and remove all doubt.

In light of this week’s events, more people than just Paul Dowson should reflect on that.

Badger on a spring