Home > Comment > Badger > Badger and the lessons of history
Badger 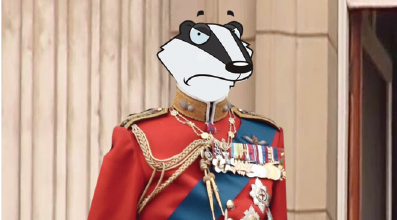 BADGER has never been much of a fan of royalty and nobility.

Badger finds it incomprehensible that inbreeding is the way to cement influence. He thinks it peculiar that so many believe the hereditary principle is a sound foundation for a 21st-century representative democracy.

A state founded on insurrection, murder, religious intolerance, and adultery is a strange example of what a nation can and should be.

Of course, a great deal of English history is anything but English.

England is a state that was forged by bloodshed, successive – and successful – invasions by the French, the exercise of arbitrary powers by unchecked monarchs and/or their lackeys and favourites, and lust for expansion.

The focus of its rulers for the first century and a half after 1066 was not England. They cared more about their French lands and influence there.

Richard the Lionheart, the romantic figure at the heart of so many English romances, spent only six months in England after he inherited his father’s throne. That’s six months in a ten-year reign in which he used England as his moneybox.

He died not defending England but in a pointless skirmish during a dispute with one of his French neighbours outside an obscure French castle. He believed it contained gold.

Richard the Lionheart is buried in France. Because he was – in all respects apart from being born in Oxfordshire – French.

The English conquered Wales by degrees and set about chaining its people to the Franco-English state. Ironically, it was the first monarch to issue decrees in English – not French – that finally subdued Wales (Henry IV).

Within eighty years of Henry IV’s death, a Welshman with a claim on the throne so tenuous as to be almost laughable was King of England (Henry VII).

Wind forward another couple of centuries. The English had tried to assassinate one King; executed another; had a republican autocracy; brought back the monarchy; been invaded by the Dutch to help depose another king; had a Dutch king whose claim to the throne was that he married the deposed King’s sister; then had a Queen without offspring.

After casting around Europe for a spare, the English alight upon a distant relative of Queen Anne. He had the inestimable advantage of being Protestant. Others, with far stronger claims, were disqualified for being Catholic. Badger doesn’t crib from Wikipedia, but George’s claim to the throne is summarised admirably on it.

‘He was the eldest son of Ernest Augustus, Duke of Brunswick-Lüneburg, and his wife, Sophia of the Palatinate. Sophia was King James I of England’s granddaughter through her mother, Elizabeth Stuart, Queen of Bohemia’.

As claims go, it’s stronger than Henry VII’s. But not by much.

George I was a traditional sort of English monarch. He wasn’t English, wasn’t a great English speaker, preferred his continental home to England, and often communicated with his ministers in French. And he really didn’t get along with his children; neither did they with theirs.

To describe the Hanoverian monarchs (rebranded as the House of Windsor as a result of WW1) as having dysfunctional family relationships is to miss the opportunity to describe them as endlessly fighting like cats in a sack.

And so we trip merrily onward to the twentieth century – noting that George V was euthanised by his doctor – until we reach the reign of the current monarch.

Badger pauses to pay tribute to the current members of the royal family. They are nowhere near as crackers as most of their predecessors. Their ill-luck is to have their crackersness played out in the media and be fawned over by Nicholas Witchell.

By the by: is it any wonder that, if your great gran five times removed was porked by William IV,  you can exercise power, the tip of the spear of the state is poisoned?

There are 800 members of the House of Lords. Unelected. Appointed according to political whim. A whole chamber of legislators selected by a process little better than ‘Buggin’s Turn’.

The royal family reflects the nation: it contains, no doubt, cranks, alcoholics, bigots, idiots, perverts, the spoiled, the humble, jokers, smokers, midnight tokers, the intelligent, the dim, the dedicated, the prudent, and the feckless. Like the nation, a family member might combine several of those traits in their personality.

The vision of Princess Anne off her gourd on some high-grade Moroccan red leb is an enchanting one. Badger suspects, however, the reality of everyday life is as tedious for many royal family members as it is for the rest of us.

With added horses and oodles of dosh, but tedious nonetheless.

It’s easy to forget that the tabloids bleating about the late Diana Spencer’s ‘legacy’ are the same ones that hounded her for her extra-marital affairs and personal entanglements. It was paparazzi who hounded her to her death. Those paparazzi worked for the same papers that created a post-mortem cult around Diana.

The media and the people are complicit in the game of shadows around the royals.

The English monarchy depends on the people knowing the royal family’s shortcomings but choosing not to notice them. In the case of ‘royal correspondents’, you get limited access for carefully presenting only a carefully laundered and pre-approved version of events. In those circumstances, you are not a journalist. You are a courtier.

People have access to global media outlets and can read less deferential and more probing stories about the Royals online. The people can always find out what lies beneath. Otherwise, Prince Andrew’s unfortunate involvement with child trafficker and paedophile Jeffrey Epstein would not be headline news.

Whatever happens, people buy into the underlying untruth that – whatever their individual shortcomings – the monarchy must be whiter than white.

Unless you’re black and American.

Badger and the fury of shame