Home » Badger on a spring 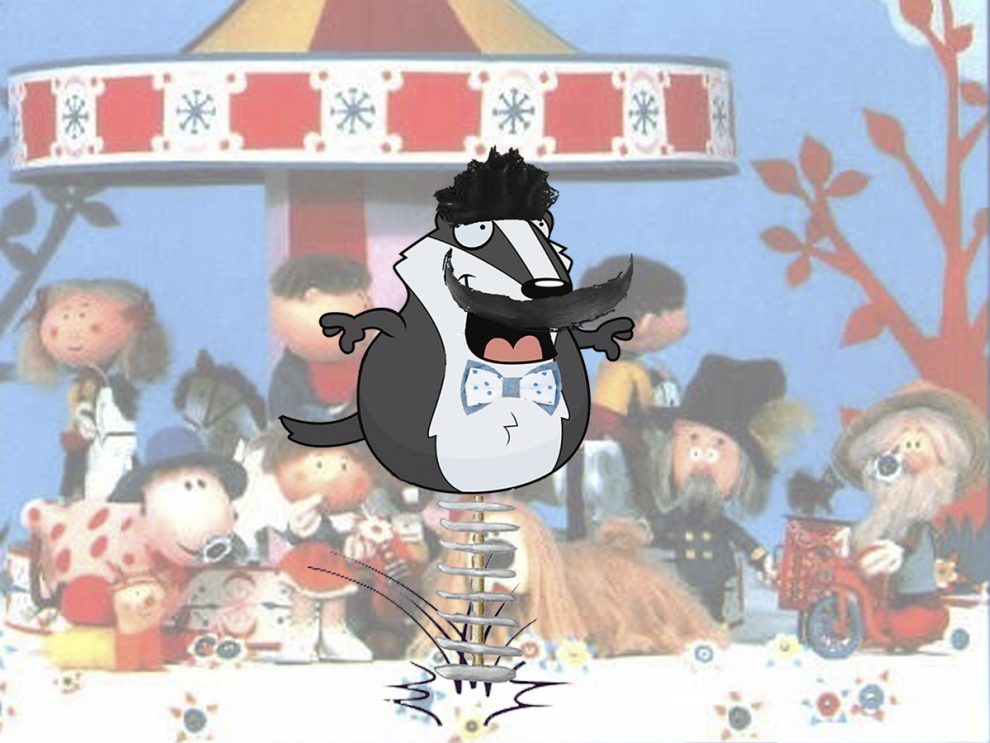 HOPE, the saying has it, springs eternal.

It draws to mind some undignified images of hope, bouncing around like Zebedee from the Magic Roundabout or bounding over the skyline like Inspector Gadget.

For those of you of a younger disposition, the above were popular characters from children’s TV before every youth-oriented drama featured a social worker and every comedy taught ‘an important lesson’.

Badger hopes, forlornly, that the time will come when the telly is more fun and less angst-ridden.But there’s hope, boinging around, bouncing in and out of lives at random.Badger has always thought that hope, rather like luck and life, depends on an individual’s actions. Generally speaking, if you have a bracingly pessimistic view of existence but are prepared to find the positive, you will.

Hope doesn’t come as so much of a surprise then.

What the old saw means is that hope – like a freshwater spring – bubbles away continuously. It permeates the rock and soil upon which we leave and bubbles to the surface.

Here we stand, on the edge of Spring, and there are signs of hope around us.

People are being vaccinated against Covid. An outside chance exists of a more-or-less traditional Welsh summer (inundated by tourists and much moaning about the weather).There could even be a cricket season.

There’s not a batsman who executes even the crudest hoick over midwicket who doesn’t think that he completed his shot as well as Ben Stokes. There’s not a bowler who can’t see himself producing a wonder ball to dismiss Joe Root. Often, as he gets carted by the opposition number ten who’s come to the crease with half-smoked rolly tucked behind one ear and wearing daps. No fielder ever trod the outfield without thinking of executing a turn and throw like Jonty Rhodes or plucking the speeding ball from the air as though it were a swallow in flight.

Hope – and in some cases self-delusion – really does bubble away in people’s lives.

This is why Badger is struck by the misery of so many politicians, commentators, and social media.We are still in a pandemic that has claimed over 100,000 lives across the UK.

The consequences and costs of that pandemic have been economically ruinous and will be met by future generations.All of that is true.But look at what’s also happened.

Communities have come together. There’s a renewed appreciation of those who work at the foundation-levels of our economy. People have fresh regard for those who provide us with services we rely upon.

The work for recovery doesn’t start with throwing vast sums of money at massive projects in the vague hope they’ll boost the economy. It begins with doing more to ensure that we keep the pandemic’s gains and build upon them.

The people who’ve suffered the worst of the economic fallout of Covid-19 are those who could least afford to lose out. Furloughed middle-class office workers have lost comparatively little (as demonstrated by several surveys published this last week). Those in the service economy have taken a pasting. Wales – like the rest of the UK – has a service-based economy. In Wales’ case, many jobs in North-West and West Wales depend on one particular element of the service economy: tourism and hospitality.The pandemic has revealed two things.

Firstly, the hit from the loss of tourism and hospitality has fallen unevenly on those working within those sectors.Secondly, the areas most dependent on tourism must diversify their economic base and incorporate economic activity which does not rely on seasonal employment.

Doing the latter is a long-term strategy. There is no quick fix.

For starters, any meaningful economic activity depends on infrastructure investment and the delivery of goods and services for which a market demand exists.

Any attempt to diversify local economies MUST identify what can be realistically delivered in the places which need the most help. What is the point of providing more well-paid permanent jobs in – say – Bangor, if the need for those jobs exists in – for example – Barmouth

.A more significant waste of time, money, and effort would be harder to imagine.

Aspiring to create new jobs in new technology-based enterprises is all well and good. However, will those enterprises provide enough jobs to replace jobs displaced in other sectors?

Experience suggests new tech companies employ fewer people than those in other sectors. Besides, there’s the chance of merely shifting economic activity from one place to somewhere else. That’s the massive con surrounding the Westminster Government’s freeport plans. What freeports are most effective at doing is moving economic activity from point A to point B and losing tax revenue.Sticking with tourism is a purely tactical and short-term solution.

It is what is needed now. However, doing more of the same forever and a day won’t address economic imbalances. It won’t diversify local economies to build greater resilience for the future.A plan is needed.

The Welsh Government could make a start by using the tools it has to better effect; nevertheless, despite the presence of so many candidates in its Cabinet, it doesn’t have all of the tools it needs.

Labour lacks traction in large parts of Wales for one primary reason. In Government, it is hell-bent on providing one-size-fits-all solutions. It’s done so with healthcare provision. It is clueless about agriculture and the rural economy. It talks a big game about ‘connectivity’ without thinking about what it’s connecting to where. It spent billions of EU money on roads connecting Valleys towns with no industrial base to justify the investment.

It’s ‘Field of Dreams’ economics: ‘If you build it, they will come’.

That’s where aspirational strategies lead when they are not founded on economic reality.

If you want to replace the tourist pound, you need far firmer foundations than the bare assertion that doing so is possible.

Once you realise that, there really is hope.

Jonathan Edwards: Devolution as we know it is dead – Where does Wales go next?
Unlimited debt will put us all in hot water
Comment