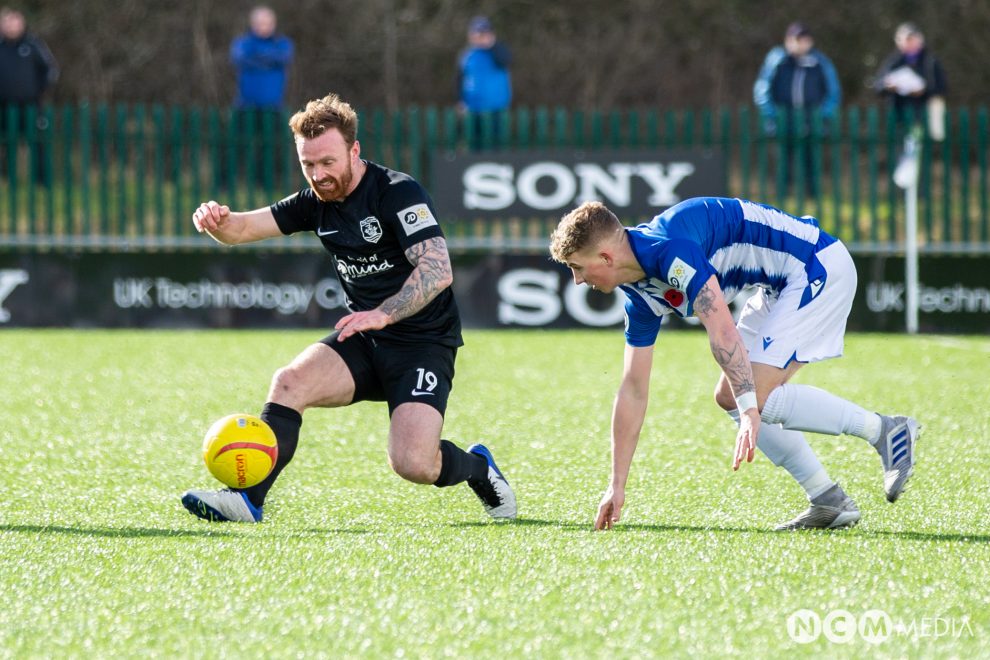 LEAGUE leaders Connah’s Quay Nomads were held to a 0-0 draw by Penybont on Saturday, March 13.

The draw extends the Nomads’ lead at the top to three points while Penybont remain fifth.

Nomads’ Michael Wilde was chasing his 200th goal in the Welsh top flight while a win would have seen them earn a record tenth in a row.

Andy Morrison, who spent the game in the stands due to suspension, started a side with only one change as he handed recent signing Johnny Hunt his first start in place of Neil Danns.

The visiting Nomads started the game well in the blustery conditions, and were soon winning set pieces in key areas of the Penybont half. In the 5th minute, a Danny Holmes throw in was sent out for a corner, which Johnny Hunt took, with the wind helping the ball swing out for a goal kick.

In the 9th, Holmes again delivered with a free kick floated into the Penybont area, but it was able to bounce out of play safely for the hosts, who were focused on keeping Nomads at bay.

With 20 minutes played, Nomads were on top and enjoying the lion’s share of possession, with the likes of George Horan and Danny Harrison sweeping away Penybont’s rare counter-attack attempts.

On 25 minutes Horan went close at the Penybont end, rising high to head in a cross from Hunt, only to narrowly miss his chance to connect for a header.

Two minutes later Nomads had one of their best chances of the afternoon, when Michael Wilde headed a Declan Poole cross at close range, only to see keeper Morris push the ball away at the last second to deny him the opener.

With half an hour played, Connah’s Quay were creating chances frequently with good runs from the likes of Danny Davies and Declan Poole, who were helping force a number of corner balls to put the pressure on Penybont.

In the 38th, Hunt took a corner and then received the ball around 15 yards from the goal, and had his shot blocked by the committed Penybont defence. Penybont did have a chance right before the interval when Lewis Clutton went through on goal in the 44th, but sent his shot from 12 yards out way wide.

Nomads then hit back in the final minute of the first half, whipping a ball into the Penybont area which Horan headed just over the crossbar.

During half time, Andy Morrison made his first change, bringing on Aron Williams in place of Danny Davies as Nomads looked to break the deadlock following the interval.

They started the second half well, and were soon back in the home side’s final third pushing for an opener, targeting the Penybont goalmouth with set pieces such as Williams’ long throw in on 48 minutes.

Michael Wilde then challenged for the ball inside the host’s six yard box, and clashed with Billy Borge as he looked to send a header goalwards from just a few yards out, with Penybont winning a free kick to cancel out the chance.

The hour mark arrived and there had been little change at the SDM Glass Stadium, with the Nomads on top and still chasing the elusive opening goal whilst goalkeeper Ollie Byrne remained untested.

With 25 minutes remaining, Nomads made a double sub, bringing on Neil Danns and Sameron Dool in place of Danny Harrison and Craig Curran. The two introductions quickly got involved with driving the ball into the Penybont final third, but the stalemate continued as the game approached its latter stages.

There was a Nomads chance in the 73rd, when sustained pressure on the Nomads goal saw Horan go clear from around 12 yards, but his strike hit the side netting. In the 76th, the ball remained in the Penybont end and Holmes stepped up to have a long range shot from 25 yards which went over for a goal kick.

In the final 10 minutes, both sides were looking for a goal to seal a last-gasp result, with Nomads continuing to dominate the possession. In the 85th, George Horan and Neil Danns combined inside a packed Penybont area, with keeper Morris collecting before they could get a clear shot away. Horan then went agonisingly close to a late winner in the 86th, flicking a corner ball onto the Penybont crossbar with keeper Morris able to collect the rebound.

Four minutes of additional time were indicated at the end of the game, and Nomads used these to keep the pressure firmly on Penybont. However, following a 92nd minute corner ball which went out for a goal kick, they were forced to settle with a point.

The 0-0 draw kept The Nomads top of the JD Cymru Premier and following TNS’ late kick-off defeat at Haverfordwest, The Nomads opened up a three point gap at the top of the table, and extended their unbeaten run to 11 games.

The Nomads will now move onto another top four clash, facing Bala Town at Maes Tegid on Tuesday, March 16, for a 7:45pm kick off streamed live by Sgorio.

Another crucial clash at the top of the table sees Penybont host Barry Town United, kick off at 7:45pm.