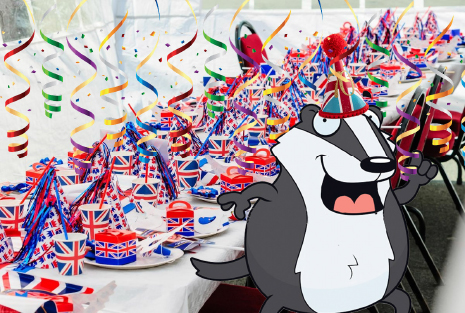 TO THOSE of Badger’s readers of a monarchical persuasion, “Merry Jubilee!”
Your hearts must swell with pride to celebrate Her Maj’s seventy years on the throne.
Huzzah, ma’am, for your service and managing to live so long; now, until what time are the pubs open?

Badger thinks he’s got that one right.
Some of us a lucky to get a decent pension and the occasional bag of toffees to gum when we get older.

However, even the most fervent revolutionary republican realises that propping up a nonagenarian great-grandmother against a sunny wall in front of a firing squad would be self-defeating.

Even the maniacal instead of monarchical occasionally land on planet Earth.
So a “Merry Jubilee” to those of Badger’s readers, too.
Badger is amused – nay, readers, tickled – by the idea that monarchs should retire when they reach a certain age.

That’s not how hereditary rights of succession work.
In the UK – at least from now on – the eldest surviving child of the previous monarch’s children ascends to the throne. If they’ve bitten the big one before then, their eldest child gets to pop on the Crown for the rest of their lives.

If you think for one minute about having a monarch, you have to realise that’s the only way to maintain the institution in the United Kingdom. If a king or queen can shuffle off to Buffalo whenever they feel like it, the aura that surrounds the idea of monarchy disappears.
Instead of rule by right, kings and queens would rule at their convenience and preference.
That’s the thing with all things hereditary. It’s like male pattern baldness. Nobody chooses to have it; you inherit it without a vote.

If you can lay aside the monarchy’s powers if you get bored or long in the tooth, you may as well pick the next ruler after a reality TV show’s telephone vote.

Picture a sort of “I’m A Monarch. Get Me Out of Here”, where Ant and Dec force contenders to live in a filthy council flat with Nicholas Witchell for six weeks until one of them batters him to death.

It’d be compulsive viewing, readers.
Over the last 1200 years, there’ve been good monarchs, bad monarchs, indifferent monarchs, dim-witted monarchs, warmongering monarchs, and any number of examples to support the idea that the concept of treason depends on a random day on the calendar.

However, each has claimed – however tenuously, laughably, and unlawfully – to inherit the throne through the right of succession conferred by royal blood.
That means that being king or queen does not guarantee that the throne’s occupier is wise or intelligent.

In the case of the present royal house, it means that they descend from a remote German cousin of Queen Anne who ascended to the throne because they were the first convenient male protestant available.

The notion that the Crown should skip a generation – that Elizabeth II should be succeeded by William V, leaving out Prince Charles – is for the birds.
Besides showing a touching faith in the untested progeny of a pair of noted dingbats, it would undermine the basis of the institution of monarchy.

That is not a defence of monarchy – Badger couldn’t give a hoot either way – but those are the rules.

Once you start tampering with them to suit yourselves or satisfy public sentiment, the institution’s legitimacy ends.

Badger does not doubt the UK’s current constitutional arrangements. However, before the case for change is made, those proposing changes need to have a clear vision of what to change, the mechanisms for change and what will replace the current arrangements.
Naturally, devout republicans claim we would all be better off with an elected head of state, a ceremonial president on much the same lines as that in the Republic of Ireland.
They point to recent occupants of that role: Mary Robinson, Mary McAleese, and Michael D. Higgins.

They’re not fond of pointing to Eamon de Valera, whose pernicious influence and cultural conservatism validated the Irish Unionist sentiment that “Home Rule meant Rome Rule.”
Until it joined the EU, and for decades after, successive Presidents of the Irish Republic and Irish parliamentarians kept the Irish Republic poor. Its institutions were corrupt and backwards-looking. The state turned a blind eye to shameful ecclesiastical abuses.
Don’t you ever wonder why so many people from the Republic ended up in the UK or America from the 1950s onwards?

And imagine the candidates for the presidency of the UK.
Two words: Nigel Farage.

Replace the odd, dull but dutiful Prince Charles with that hooting ninny, readers.
Undoubtedly, republicans envisage electors selecting a well-meaning and cultured individual cast from the same mould as themselves.

The likelier outcome in an open election is a Trumpian populist unafraid of pandering to our basest instincts.

The UK’s first citizen wouldn’t be a poet, an artist, a philosopher, or a representative of select metropolitan values.

For every Michael D. Higgins, there are many more Bokassas.

The person who greets foreign heads of state would be either a party hack from one of the current mobs or someone prepared to say anything for a vote.

The two propositions are not mutually exclusive.

We’re back in Ant and Dec territory – possibly with Simon Cowell or David Walliams pressing a golden buzzer to send someone straight through the live semi-finals and the public vote.
The glorious reign of Trixie the Performing Pooch would be all but assured.

Badger and the Grand Slam